SOUNDVIEW, Bronx — A McDonald’s night shift manager was arrested after he was caught allegedly selling cocaine while on the job, according to prosecutors in New York City.

Guerrero allegedly made eight sales of cocaine to an undercover officer in large quantities worth nearly $10,900, prosecutors said. 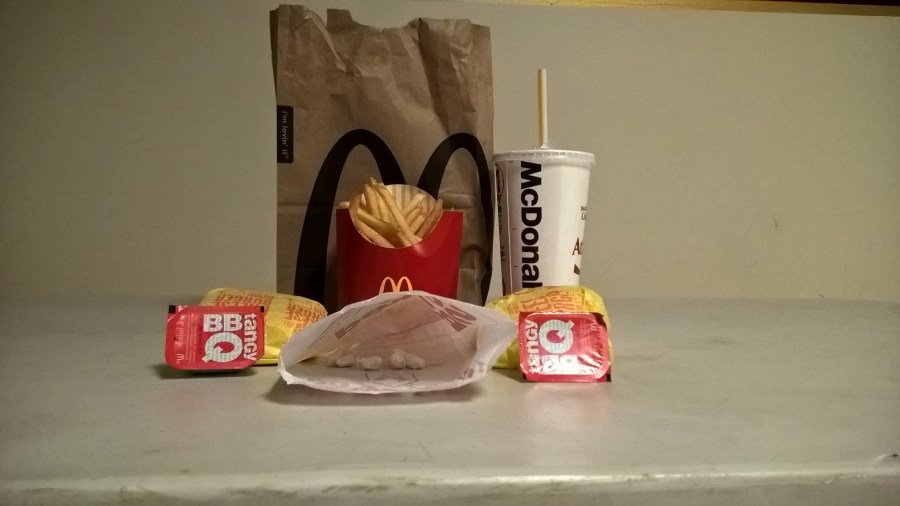 During the last transaction, Guerrero allegedly sold about 100 grams of cocaine and a quantity of crack cocaine to one of the undercover officers, according to prosecutors.

Guerrero has been the night manager for the McDonald’s branch for 8 years, they said.

Investigators said the manager would allegedly put the cocaine inside cookie bags and also hid the drugs in a bathroom soap dispenser. Some deals would take place in the bathroom or over the counter, prosecutors said.

No other workers were arrested.

While searching the suspect’s home in the Pelham section of the Bronx, officials said they found more than 200 grams of cocaine and more than $5,300 inside Guerrero’s 2-year-old son’s playroom.

The boy’s mother Leidy Cabral Castillo was arrested and faces charges of criminal possession of an illegal substance, criminally using drug paraphernalia and unlawfully dealing with a child.

Guerrero also faces those charges plus charges of criminal sale of a controlled substance, prosecutors said.

Bronx poet -- and her mother -- write prose with a purpose

Police search for answers in death of twin infants

PIX11 was on the scene Tuesday as local artist Andaluz was hard at work on the mural of the Yonkers rapper. Andaluz is known for art like his mural tributing Kobe Bryant outside the Barclays Center in Brooklyn.

NEW YORK — Prosecutors say no charges will be filed against a half-dozen New York City police officers who opened fire during a chaotic encounter between another police officer and armed man that left both dead in 2019.

Bronx District Attorney Darcel Clark announced Friday that the officers had been justified in approaching 27-year-old Antonio Williams and firing 15 rounds after the man reached for a loaded revolver.

SOUNDVIEW, the Bronx — Two people are wanted by police after being caught on camera beating up a man in a Bronx robbery earlier in April, the NYPD said on Thursday.

According to police, it happened around 8 p.m. on April 4 when the two unidentified individuals approached the 25-year-old man near the intersection of Soundview and Lafayette avenues and attacked him.

COVID-19 Hate Crimes Act could get Congressional vote this week

Your grocery bill will likely be more expensive this month

Stimulus checks: Missing a payment? Here’s how to track it down

COVID variants in NYC: See where different strains are spreading by zip code