HART ISLAND, the Bronx — It’s often referred to as the island of the unknown, a place full of mystery.

Hart Island is the largest public cemetery in the entire country, with over one million people buried there.

With all those souls and lives resting there, one might think it is an area bustling with people.

On the contrary: Hart Island is a place very few have ever been able to visit.

The 131-acre island, smack in the middle of Long Island Sound, sits off the coast of the Bronx and has been a burial ground dating back to the 19th century.

Melinda Hunt runs the Hart Island Project, a website explaining much of this history.

Hunt explains that at one time, courts would order patients undergoing treatment for diseases like tuberculosis to do so on Hart Island, so Phoenix House opened a care facility that once operated there.

A base for Nike missiles once occupied a corner of the island during the Cold War.

But, in the end, it became a cemetery, a place that became known as a place to bury the unknown, the unclaimed or the poor who could not afford funerals. There are stories and myths about the dead, who were buried there by inmates of Rikers Island making 50 cents an hour.

“You are entering the jail system,” says Hunt, referring to those who are buried on the island. “It is jail for the dead.”

Until 2015, that is what most people knew and believed about the island.

But not everyone buried there fell neatly into that narrative. 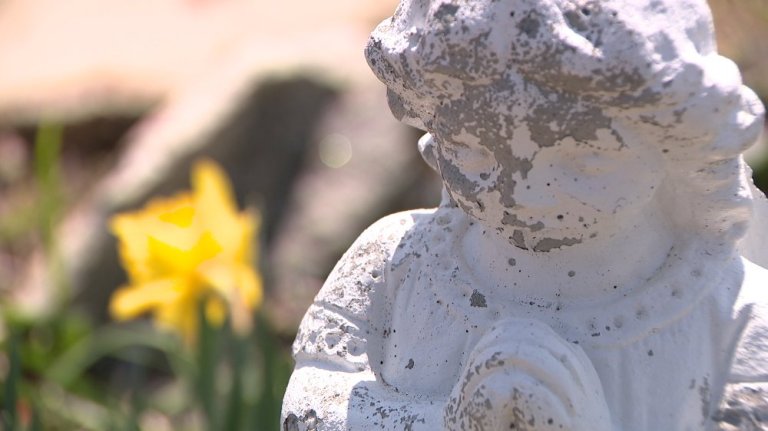 Darryl Alladice and his brother, Paul, were born and raised in New York City.

In 1987, Paul was striving to become an actor in New York. Darryl moved to Boston to pursue a music career.

By 1997, the two had grown distant, talking every few months.

“I realized at some point,” remembers Darryl, “that he [Paul] was not answering his phone.

He began wondering whatever happened to his brother. His niece did not even know what became of her own father.

It turns out, Paul had HIV/AIDS, and checked himself into Saint Luke’s Hospital in 1997. He died there, alone.
However, Darryl or his niece were never notified.

“To what extent did you reach out to say you need to claim this body,” asked Darryl.

Records obtained by PIX11 show that after six days unclaimed, Paul was sent for a city burial on Hart Island.

Paul was not poor, he was not unknown. His family were never notified, an error in the system.

For the next 15 years, Darryl searched for answers. He obtained the death certificate for his brother, but could never find where he was buried.

He wanted to close the chapter.

Darryl then found Hart Island. For decades the island was closed to the public, to the families who lost loved ones and to the media.

But, in 2015, families of the deceased filed a lawsuit demanding access – and they won.

It was then, that the Department of Corrections granted families access to the island once a month.

Thanks to the Hart Island Project, Darryl confirmed his brother was on the island — and he’d finally be able to visit him again.

For relatives, the process of gaining access to the island is grueling. Family members have to sign up in advance to make sure there is space for them and turn in their cellphones and cameras before being brought over by ferry to the island.

They are driven in a Department of Corrections van to the site where their loved one is buried, and then escorted by a correction officer.

Each grave is marked by a simple stone or PVC pipe with a number. Darryl had no idea that in each grave, there are 150 bodies in wooden boxes. In areas where babies are buried, 1,000 can fit into a mass grave.

“I thought he would be by himself,” said Darryl.

Hunt’s work on the Hart Island Project connects families with their lost loved ones. They undertake the massive task of figuring out who is buried where and publishing the names of the dead on her website. She argues the Department of Corrections should not run a public cemetery.

“The Department of Corrections managing a cemetery is a misuse of the penal system,” Hunt said. “People cannot freely walk around.”

PIX11 asked the DOC why loved ones can’t freely come to the island, say when they want to pay respects on holidays or birthdays. The response was simple.

“We have the visit monthly option.”

Family members can remove a body from Hart Island, but only if they do so within 10 years of the death.  And it’s a complicated and costly process at that.

In Darryl’s case, he missed that deadline. Therefore, his brother will always be buried there.

That is why Darryl, and so many city lawmakers, are now involved in trying to transfer the responsibility for Hart Island from the Department of Corrections to the Parks Department, which would allow more access.

For now, Darryl says he will hopefully schedule his visits months in advance to ensure he can pay respects to his long lost brother — and perhaps, one day, even see his name on the grave.

How independent pharmacies are helping the vaccination effort

CO-OP CITY, the Bronx --- Mayor Bill de Blasio and other local leaders visited a vaccine megasite in Co-Op City Saturday, where the mayor says they hope to eventually vaccinate 1,000 people a day.

For now, that number is at about 200 a day since it opened Thursday. Residents being given the one-shot Johnson & Johnson vaccine.

NEW YORK -- More than 2.1 million doses of vaccine, enough for about 16% of all eligible adults, have been administered in New York City, according to Mayor Bill de Blasio.

Also, state vaccination megasites, including the Jacob Javits Center on Manhattan's west side, have been able to increase capacity, in some cases three-fold, now that the Johnson & Johnson vaccine has joined the coronavirus prevention arsenal.

Still, there are some problems with getting people connected to the vaccine, even if they have appointments.

THROGS NECK, the Bronx — Two thieves were caught on camera stealing a large portrait of a dog from the front of Bronx bar, police said Thursday.

Surveillance video released by the NYPD shows the unidentified duo setting up a ladder outside of Alfie's Place, on 177th Street in the Throgs Neck section, around 1 a.m. on Feb. 20, police said.