THE BRONX — Ten people, including firefighters, were injured when a fire broke out at an apartment building in the Mt. Eden section of the Bronx Friday night.

Authorities responded to the blaze on the top floor and roof of a six-story building on Grand Concourse near Rockwood Street around 8:30 p.m.

Firefighters were seen carrying hoses up six flights of stairs.

Video from Citizen App shows heavy flames coming from the roof of a building.

According to fire officials, nine firefighters and one civilian sustained non-life-threatening injuries.

By midnight, firefighters were still operating and opening up hot spots to make sure the fire was fully extinguished.

Firefighters deemed the blaze accidental — caused by an electrical issue. Smoke alarms were present and operating. 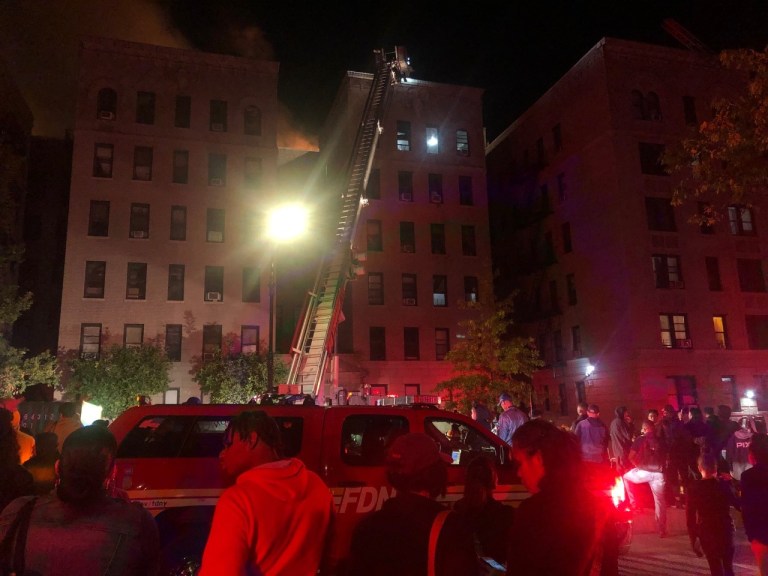 Editor’s note: This story has been updated with the number of injuries reported.

How independent pharmacies are helping the vaccination effort

NEW YORK -- More than 2.1 million doses of vaccine, enough for about 16% of all eligible adults, have been administered in New York City, according to Mayor Bill de Blasio.

Also, state vaccination megasites, including the Jacob Javits Center on Manhattan's west side, have been able to increase capacity, in some cases three-fold, now that the Johnson & Johnson vaccine has joined the coronavirus prevention arsenal.

Still, there are some problems with getting people connected to the vaccine, even if they have appointments.

THROGS NECK, the Bronx — Two thieves were caught on camera stealing a large portrait of a dog from the front of Bronx bar, police said Thursday.

Surveillance video released by the NYPD shows the unidentified duo setting up a ladder outside of Alfie's Place, on 177th Street in the Throgs Neck section, around 1 a.m. on Feb. 20, police said.

THE BRONX --- Bronx residents can get appointments at Yankee Stadium through the night starting Thursday.

A successful vaccine rollout hopefully means we're in the final innings of the pandemic. At the legendary ballpark in the Bronx, a constant line of people getting vaccinated for the past few hours.