Police are looking for five men in connection with an attack and robbery in the Bronx. (NYPD)

BELMONT, the Bronx — Police are looking for a group of men they say knocked on a Bronx man’s apartment door and proceeded to attack and rob him when he opened the door.

On Friday, May 17, just after midnight, the group of five unidentified men walked into a residential building near East 183rd Street and Washington Avenue in the Belmont section of the Bronx, police said.

The group knocked on the 39-year-old victim’s door and when he opened it, the five men began beating him and cut him in the torso with a sharp object, according to authorities.

While being attacked the victim dropped his cell phone, which the group took before fleeing the scene, police said.

The victim was transported to a local hospital, according to authorities.

Police released the below surveillance images of the group of men they’re looking for.

The first man is described as about 20 to 25 years old, standing 5 feet, 9 inches tall, with braided hair and last seen wearing a white t-shirt and blue jeans.

The second man is described as about 20 to 25 years old, last seen wearing a green Adidas jacket, and dark pants.

The third man is described as about 20 to 25 years old, last seen wearing a white t-shirt, and blue jeans.

The fourth man is described as 20 to 25 years old, with a heavy build, and last seen wearing a pink sweatshirt, and blue jeans.

The fifth man is described as 20 to 25 years old, last seen wearing a black hooded sweatshirt and black sweatpants. 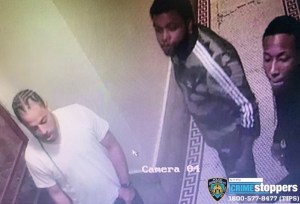 All four tires, rims stolen from woman’s car in Bronx