BEDFORD PARK, the Bronx — A man who grabbed an officer’s gun and used it to fatally shoot a bodega clerk overnight was taken into custody Tuesday after the cop’s partner shot and injured him, according to the NYPD.

Efraim Guzman, 30, was arrested after he grabbed an officer’s gun and used it to fatally shoot a bodega clerk. (NYPD)

The incident began when Efraim Guzman, 30, allegedly started a fight out at N & A Deli at East198th Street and Valentine Avenue around 1:08 a.m. Police on scene initially provided a different spelling for Guzman’s first name.

Guzman was kicked out before going to the A & M deli across the street, according to officials.

The N & A deli worker alerted the employees in the A & M deli, and around seven customers and a few employees began fighting with Guzman.

Police arrived at the scene and tried to grab Guzman, who then struggled for the officer’s gun and managed to pull it from the cop’s holster, officers said.

“Obviously we’ll review all the tactics and equipment involved,” NYPD Assistant Chief Larry Nikunen said at a news conference Tuesday morning. “It’s not an easy thing to do … It was grabbed and pulled out of a holster.”

The officer involved in the altercation with Guzman has been with the NYPD for nearly three years, according to a police source.

As the two wrestled for the weapon, the officer’s partner fired three rounds and Guzman was hit twice as he fell to the ground, police said.

Also during the struggle, Guzman fired 15 of 16 rounds from the cop’s gun, hitting the N & A store clerk and killing him.

In the midst of Guzman firing shots, one of the officers stood in the line of fire and was attempting to shield the clerk from injury, police said.

Nikunen said the officers were “very lucky” that they were not injured or shot in the incident.

“One of the officers looked like he was trying to protect the civilian,” Nikunen told reporters. “He was shielding and trying to push him away as Mr. Guzman was firing shots in the store.”

Investigators believe the victim was caught in the crossfire and not the intended target.

One source said the victim was the N & A bodega owner and others said he was a clerk. Police on scene were unsure and his name was not provided.

A longtime customer and local resident said the Camara had been at the store for some time.

“He was a great worker for many years many years,”Julio Espanal said. “I came here from Puerto Rico when I was 16 and he was there working, one of the best.”

Another customer said Camara worked hard in order to help family members back in Africa.

“(He) was a good man, he worked real hard to send money back to his family,”Jose Cruz said. “He would always be cleaning, never in trouble or arguing with anyone.”

Thomas Baumann has lived in the neighborhood for 54 years, “We just lost a family member of the community.”

Baumann on Tuesday afternoon told PIX11 News he was stunned at the sight of his friend Wali Camara, being wheeled away by EMTs on a stretcher, “When I see the paramedics rushing him into the ambulance that is when I knew it was Wally, they were working on him.”

Jessica Andrade heard the rapid fire shots from her bedroom, “Boom, boom, boom, like that.”

Seconds later she was up on the roof of her building, creeping up over the edge where she captured this cell phone video of the worker being transported out of the store on a stretcher. When asked how nervous she was when approaching the edge of her rooftop to shoot video with her camera not knowing what had just happened? Andrade explained how her primary concern was being detected, “Well I was a little scared because I don’t want no one to see me.”

The accused shooter is in stable condition and has been taken into custody.

He has been previously arrested on weapons, assault, robbery and drug allegations, according to NYPD records.

Myles Miller contributed to this report. 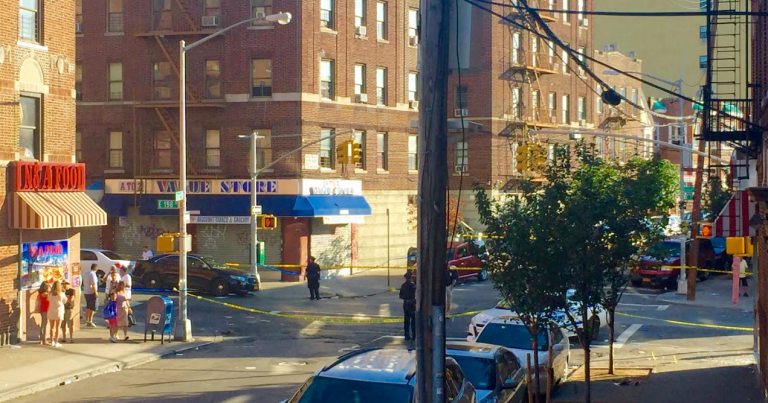 Bronx NYCHA residents call for cleanup of building and grounds

MANHATTAN — The FDNY announced on Wednesday that a man had been arrested for allegedly starting at least three fires on Manhattan streets since the start of the year.

Fire Marshals arrested Caleb Ganzer, 35, after outdoor dining structures and rubbish were set on fire across the borough in January, June and July, authorities said.

MOUNT EDEN, the Bronx — The NYPD on Wednesday released video of two suspects attacking and robbing a man on a Bronx street, authorities said.

Police said it happened around 6 a.m. back on July 7, near the corner of Jerome Avenue and East 171st Street in the Mount Eden section of the borough.

New York City officials announced that the city will give $100 debit cards to New Yorkers who get their first COVID shot at a city-run vaccination site.

Tsunami warning issued for parts of Alaska after 8.2 quake