Jon Cruz, 32, was held Friday on $1 million bail after an initial appearance in Manhattan federal court. His lawyer did not immediately return a message for comment.

Cruz is a teacher and debate coach at the Bronx High School of Science.  He has worked at the school since 2006.

He was arrested on charges related to producing, receiving and possessing child pornography. 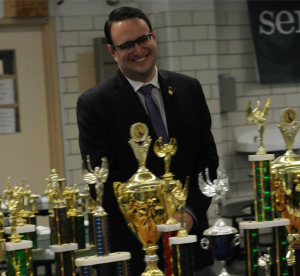 “What makes this case even more disturbing than the charges themselves is, as alleged, Jon Cruz was involved in child pornography while he was working with children every day through his job as a teacher and debate coach,” U.S. Attorney Preet Bharara said in a statement Friday.

According to the investigation, Cruz engaged in chats with boys in New Mexico and New York state from July to December. Cruz reportedly paid a 15-year-old boy over $500 to take sexual explicit pictures of himself and send them to Cruz.

According to the complaint, the FBI had been investigating an individual who paid minors to send “nude and lascivious photographs” over the mobile app KIK since December, 2014. When tracing the IP addresses of the KIK accounts, one IP address was associated with the New York City Public School System. The investigation also showed that some of the victims were former students of the school.