VAN NEST, the Bronx — A fire that ripped through a four-story mix-use building in the Bronx Tuesday morning has injured at least 22 people and a firefighter, as crews battled freezing temperatures in their fight against the flames, according to the FDNY.

About 200 firefighters responded to the fire, which began about 5:30 a.m. on the first floor of 1547 Commonwealth Ave., near East Tremont Avenue, officials said. As of 11:30 a.m., firefighters continued to battle the blaze.

The fire is believed to have started on the building’s first floor, which houses a furniture store. There are apartments located on the floors above.

At least 22 civilians and a firefighter were hurt. All of their injuries are non-life threatening, FDNY said.

Fire officials advised residents near the fire to close their windows because of smoke and warned drivers to expect traffic delays in the area.

Firefighters have been pulled from the building and are fighting the blaze from outside, FDNY said. Large icicles could be seen forming on the building’s fire escapes, as water used by the firefighters began to freeze amid a snap of brutally cold temperatures.

A resident said she tried to flee via the fire escape, but a gate was blocking the window. Her son and daughter were able to get through, but it was not until firefighters broke the gate that she and her husband could escape. 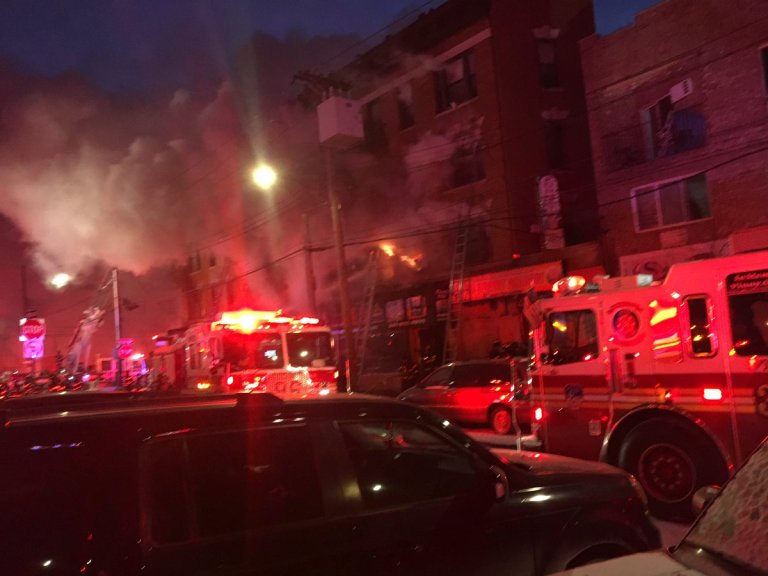 AIR11 was over the scene of the fire:

This blaze comes days another Bronx fire killed 12 people in the one of the deadliest fires in the city in more than a quarter century. The Dec. 28 fire was started by a small child playing with a stove on the first floor, according to Fire Commissioner Daniel Nigro.

The child’s mother heard him screaming and escaped the unit, but, according to Nigro, she left the apartment door open.

NYC officials deflect on attendance for first day of school