THE BRONX — Eight alleged Trinitarios gang members destroyed a room at the Bronx jail barge, prompting a fearful correction officer to flee, after learning a friend would be moved to another facility, sources said Wednesday.

Upon learning a friend would be transferred to a different facility at Rikers Island, eight Trinitarios members allegedly became violent.

As the gang members destroyed a room and allegedly tried to flood the area, and slow down the response by other officers, by turning on water, a correction officer tried to stop them with pepper spray, the sources said.

The men then “turned on her,” forcing the officer to run out of the room and lock the door in order to protect herself, according to sources.

Images obtained by PIX11 show a room filled with smashed windows, wrecked electronics on the floor and glass covering tables. A puddle of water is also seen on the floor.

When asked about the incident, Correction Officers’ Benevolent Association President Elias Husamudeen railed against Cynthia Brann, the commissioner of the NYC Department of Correction.

“This is yet another example of how Commissioner Brann has lost control of the jails. She refuses to bolster security and she continues to execute the mayor’s failed policies. As correction officers, we deserve better,” a statement emailed to PIX11 on Husamudeen’s behalf read.

A spokesman for the Department of Correction said:

“Safety is the Department’s primary concern, and our officers worked to halt the incident to ensure the safety of their fellow officers and detainees. The inmates involved are now in punitive segregation or other restrictive housing units. We are also working with the Bronx DA to re-arrest these inmates.”

The culprits are expected to be re-arrested on charges of destroying city property.

The teen, known to family and friends as Junior, was beaten and stabbed by a group of men before one of them slit his throat with a machete. Twelve alleged Trinitarios members have been arrested in connection to the June 20 killing.

It is not known if any of the men involved in Saturday’s incident are those arrested in Guzman-Feliz’s killing. 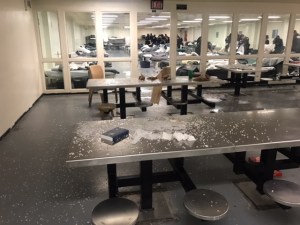 Boil water advisory lifted in Passaic after more than a month

NEW JERSEY --- A boil water advisory that caused a lot of anxiety for residents in northern Jersey was finally lifted Friday after more than a month.

It stemmed from a reservoir contamination after it was backed up with flood waters from Tropical Storm Ida.

MANHATTAN --- Get ready to lace up the skates for a seasonal tradition in the city.

Ice skating in Central Park has a history that goes dates back to the 1880s.

It's a 10 year labor of love filled with the scariest creatures imaginable: ghouls, skeletons and creepy monsters in both the front and the backyards of the Scotto-Dean’s Howard Beach home.

16-year-old killed in Lower East Side shooting, 1 other injured: NYPD

16-year-old killed in Lower East Side shooting, 1 other injured: NYPD