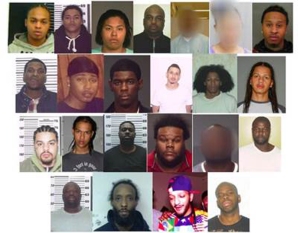 All of the alleged gangsters are part of the Untouchable Gorilla Stone Nation and the Black Stone Gorilla Gangstas, according to police.

They terrorized the residents of Castle Hill and Co-op City, planning murders and selling drugs and weapons, as well as regularly traveling to Maryland as part of criminal operations, cops say.

“Today we dismantled a criminal organization responsible for flooding Bronx streets with large amounts of cocaine,” said Raymond R. Parmer Jr., special agent in charge Homeland Security Investigations New York. “New York City residents deserve communities free of dangerous drugs and the violence that comes with them, and HSI will continue working with our law enforcement partners to bring  these offenders to justice.”

The 23 alleged leaders and gang members were indicted on 217 counts, including enterprise corruption, attempted murder, conspiracy to commit murder and narcotics sales, among others.

See the full list of arrests from the Bronx County DA below:

Those alleged BSGG and UGSN leaders/members under indictment for Enterprise Corruption are:

RAHSAAN “Low Rider” SAMUELS, age 39, alleged to be the leader of UGSN

CORY “Angry” HICKSON, age 27, alleged to be the leader of the BSGG

Carlos Sanson Jr. on “Bump” coming to The CW