WEST FARMS, the Bronx — A student is dead, a second is in critical condition and the suspected attacker is in custody after a stabbing inside a Bronx high school classroom Wednesday, according to police.

Two students were attacked by a fellow student around 10:45 a.m., about 30 minutes after third period started at Urban Assembly School for Wildlife Conservation, NYPD Chief Robert Boyce said at an afternoon news conference.

Matthew McCree, 15, of Mapes Avenue, the Bronx, died from his injuries.

A second student, a 16-year-old student is in critical but stable condition. They were both stabbed in the chest, Boyce said.

An 18-year-old student is in custody and a 3-inch switch blade has been recovered, according to Boyce. Police initially said the suspected attacker was 16.

The attacker has been identified as Abel Cedeno, 18, of Beaumont Avenue, the Bronx. Students say the two boys allegedly started bullying Cedeno, and one of the boys allegedly threw a pencil at him.

“They pushed Abel too far. Abel was a kid who was made fun of in school. They pushed him too far,” said one of Cedeno’s crying classmates.

Police say he took out the 3-inch switchblade he brought to school, and fatally stabbed one of the boys in the chest, and seriously injured the second boy.

Detectives say Cedeno then calmly walked out of the classroom, handed the knife to a school counselor, and went willingly to the school office, where he sat, and waited for police.

“He has made statements to us, explaining what happened, which I will not go into right now,” said NYPD Chief of Detectives Robert Boyce. “We believe that this argument, thing, has been going on for two weeks, this school year. And it escalated today, after some back and forth in the classroom.”

The incident happened in a fifth-floor history class with 15 to 20 other students nearby, Boyce said. 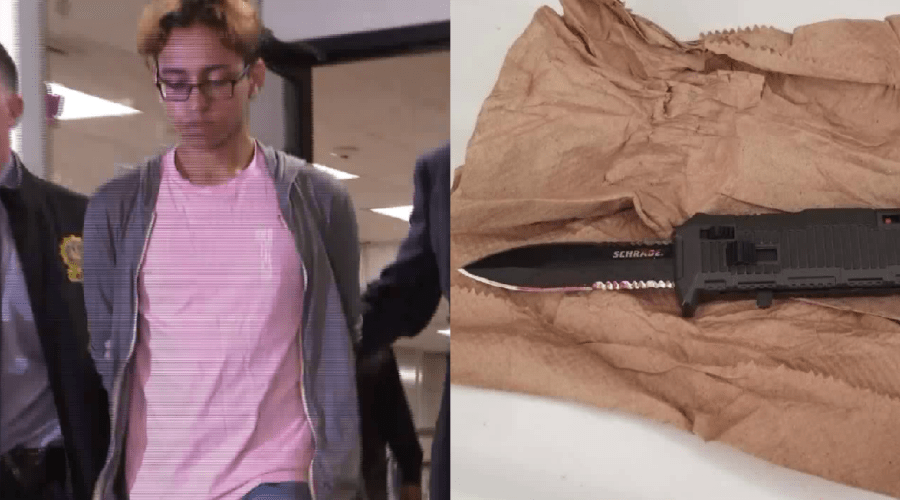 While Boyce said the bullying aspect remains unclear, he said the incident appears to be connected with an argument that started some two weeks ago when the school year began.

As of now, there are no known records of the argument, he said.

Schools Chancellor Carmen Fariña has responded to the deadly incident:

“I’m heartbroken at the loss of one of our students and this tragedy should never have taken place. We are working closely with the NYPD on the investigation and providing ongoing guidance support and counseling for the school community.”

Fariña said a letter has been sent home with the entire student body to let parents know what is happening and what will happen going forward.

“There will be grief counselors and extra guidance counselors in the school — for not only the students, but for the teachers and anyone else,” Fariña said.

The Mohegan Avenue high school is located on the top floor of a building that also houses elementary and middle schools.

It is a “non-scanning school,” meaning there are no metal detectors, according to officials.

Dozens of fearful parents immediately descended on the school upon learning of the stabbing.

“I just want my kid,” one woman was heard wailing. When asked if her child was OK, she responded, “I don’t know. They said we have to wait.”

Another parent, Santo Merced, said the school never contacted him, and he learned about the stabbing from a neighbor.

“I tried to call the school. I tried my best. I tried three times. It went to voicemail,” Merced said.

The father rushed to the school, where he saw his daughter, a kindergartener, waving at him through a window.

“Her teacher gave me the ‘thumbs up,’ saying that she’s OK, but I still want to pick up my kid,” Merced said.

Below are unedited streams of the school where the stabbing occurred.