TREMONT, the Bronx — Three firefighters were injured battling a blaze that broke out at a Bronx auto body shop Saturday afternoon.

Crews responded to a four-alarm fire on the first floor of a commercial building at 1875 Carter Ave. in Tremont shortly after 6 p.m., fire officials said.

Video from Citizen App shows thick, heavy smoke billowing from the tire shop that can be seen from blocks away.

The fire broke out as New York City deals with sweltering heat, with temperatures feeling as if they’re in the 100-degree range.

Despite the oppressive heat and humidity, firefighters contained the blaze, keeping it from spreading to nearby buildings.

“This type of weather where we keep rotating firefighters to avoid heat stroke and heat exhaustion,”  he said.

About 190 firefighters responded to the scene.

It was not immediately clear on whether or not the injuries were related to the extreme weather. 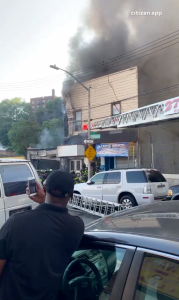