BELMONT, the Bronx — A 15-year-old Bronx boy whose fatal stabbing has shaken the community and spawned a hashtag, #JusticeforJunior, is being mourned as a good kid days after his slaying, while authorities hunt for the suspects they believe may be part of a gang.

Police responded to a call about an assault about 11:40 p.m. Wednesday in front of a deli along East 183rd Street and Bathgate Avenue.

Authorities arrived to find that Lesandro Guzman-Feliz, known as Junior, had been stabbed in the neck after he was involved in a dispute with a group of males outside the store.

The group fled the scene and Guzman-Feliz had run to the hospital, where he was later pronounced dead, police said.

Video surveillance shows the group allegedly involved in the stabbing running into and around the bodega around the time of the incident. 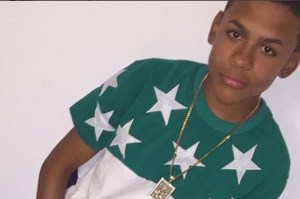 Caterina Reeves was one of many in the community who visited the memorial Friday, outside of the deli where it happened.

Reeves said she and Guzman-Feliz were in the community’s law enforcement explorers program, which teaches teens about policing.

A relative, who did not want her identity revealed, is still in shock.

“He was a good kid — always in my house, playing video games, playing with my kids, taking them to the park, always playing basketball … all the time,” she said.

Guzman-Feliz’ death is sending shockwaves in the community, and on social media as the hashtag #JusticeforJunior began trending. Rapper Cardi B, a Bronx native, was among those paying tribute, posting on Instagram about getting justice for the teen.

Private Investigator Manuel Gomez says there is a big gang problem in the Bronx and he believes gang members are the ones who took Junior’s life.

“They’re terrorizing the South Bronx,” Gomez said. “And they are just as bad as MS-13.”

Investigators hope new video of Guzman-Feliz being dragged out of the deli just before he was stabbed to death will help them find his attackers.

“They are known for killing people with kitchen knives and machetes, that is their signature,” Gomez said.

Family and friends say they hope Guzman-Feliz’ killers are caught and justice is served.

A GoFundMe page has been set up by Guzman-Feliz’ family to help with funeral costs and other financial difficulties. To donate, visit Justice For Junior.

“Every time I saw him he brought nothing but smiles to my face, to everyone’s face,” Reeves said.