RIKERS ISLAND — Two Rikers Island correction officers were assaulted by an inmate Tuesday evening — the latest incident in a trend of ongoing violence that has plagued the troubled jail.

The assault happened at the Otis Bantum Correction Center around 6:30 p.m. when officers had to break up a fight between inmates during mealtime, authorities said. One of the inmates, a member of the Bloods gang, slashed one of the officers in the ear and punched the other in the face multiple times.

The officer that was slashed received six sutures to his right ear. The other officer was treated for injuries on the right side of his face.

“We thank the Bronx DA’s Office for immediately indicting this inmate. However, because this administration has eliminated the use of punitive segregation, this inmate and others who commit crimes while behind bars, will be given another opportunity to do just that. We call on City Hall, the City Council, and the Board of Correction to correct this dangerous flaw in our criminal justice system before another one of our officers is attacked again.”

The inmates were arrested again and charged, but the incident was not classified as a slashing. Instead, the Department of Corrections listed the incident as a serious assault.

“He was cut on his ear,” Husamudeen said.  “He was cut with something.  His ear didn’t just split open from a punch.”

The incident comes at a time when recent reports have accused top correctional leaders of fudging the number of reported assaults to make it seem like reforms against violence have been working.

City Hall recently released numbers showing a 40 percent decrease in serious assaults at Rikers. The Corrections Department has denied allegations it had changed the numbers.

But to add to the pattern of violence, PIX11 obtained pictures from another recent serious incident at Rikers.

According to a source, three inmates trashed their cells Sept. 22, tearing things from the walls and shattering glass windows. The prisoners refused to listen to officers, who repeatedly yelled at them to stop.

Sources estimate the incident resulted in more than $4,000 worth of damage. 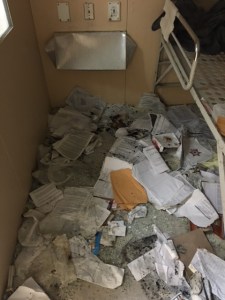 City Council Speaker Melissa Mark-Viverito said the city would have to review the numbers of violent assaults to verify their accuracy.

“We have to look at it,” Mark-Viverito said.  “We will have our analysis as to whether or not there are questions raised.”

The speaker has been backing legislation that demands more specific information on how these violent incidents are reported. She says these numbers are expected in the coming weeks.