Yemeni-American business owners closed 1,000 bodegas from noon to 8 p.m., according to protest organizers.

About 5 p.m., hundreds of people gathered at Brooklyn Borough Hall on Joralemon Street, some holding Yemen flags and signs.

Muslim participants then began the rally with a prayer at sundown at 5:15 p.m.

The bodega owners hope the protest shows the role they play in the economic and social fabric of the city. 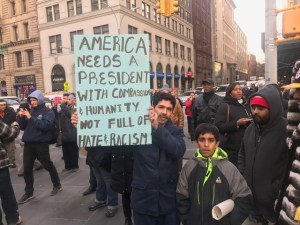 Protest organizers had considered starting the shutdown at 8 a.m., but didn’t want to hurt regulars out for their morning coffee fix.

“Even when their lives have been turned upside down, they refused to disrupt the lives of the very people they serve daily,” said Debbie Almontaser, board member of the Muslim Community Network and one of the rally organizers.

The plans for the strike came together in under 24 hours, according to Widad Hassan, a 27-year-old graduate student who helped organize the event. Bodega owners quickly decided a profit loss one day was worth it to make a statement.

They want to say they’re here and that they’ve already been here for decades without posing a threat, Hassan said.

Trump’s executive order blocks citizens from Yemen, Iraq, Iran, Libya, Somalia, Sudan and Syria from entering the U.S. for 90 days. His administration considers people from those countries to be a potential risk to America.

“Overnight a part of my identity is seen as a security threat,” Hassan said.

Bodega owners plan to spend quality time with their family members and friends during the shutdown.

Lawmakers from opposing parties team up to fight …