NEW YORK (PIX11) — Demonstrators took to the streets for a third night in a row to protest the Eric Garner grand jury decision.

Dozens stormed the Apple store on 57th Street and 5th Avenue, holding signs and chanting as they marched through the store.

Others converged in Macy’s and Bryant Park, staging “die-ins.” 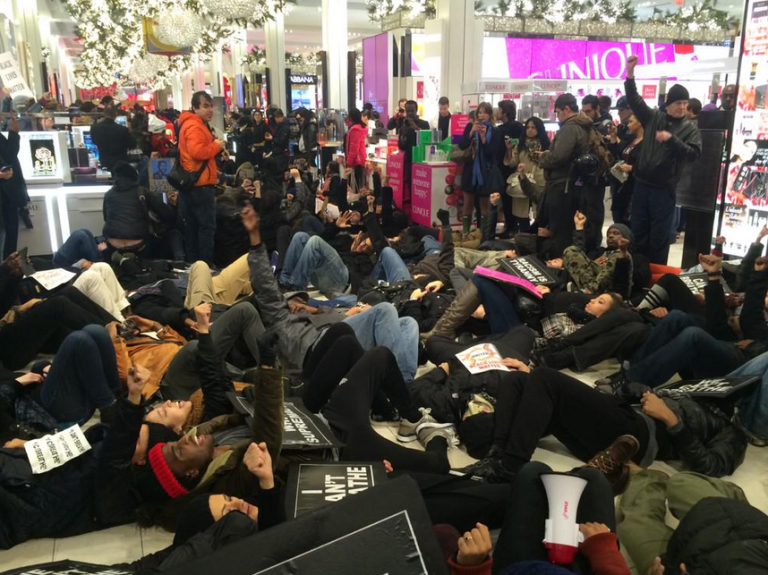 More than 200 arrests were made on Thursday night.

Demonstrators overran the Staten Island Ferry Terminal, prompting authorities to stop the ferry from departing. Marchers staged a “die-in” on Atlantic Avenue in Brooklyn, laying on street with coffins in silence.

An estimated 7,5000 gathered in Foley Square Thursday evening, and hundreds other organized in Union Square.

The crowd moved to Brooklyn Bridge shortly before 7 p.m., but had to go elsewhere when police blocked off the bridge. Protesters began chanting “Broadway! Pass it down!”

The West Side Highway and Holland and Lincoln tunnels were also scenes of a massive gathering.

The diverse crowd is venting its outrage over the Staten Island grand jury’s decision not to indict the Officer Daniel Pantaleo involved in the death of Garner.  On Thursday night, protesters also were gathering in places including Union Square and the Manhattan approach to the Brooklyn Bridge.

Another contingent of protesters blocked traffic on the West Side Highway, many chanting “I can’t breathe.”  The largest group, as of 7:30 p.m., was located near Chambers Street and Broadway, heading north.

Protesters are taking to the streets in largely peaceful demonstrations demanding justice for Garner, who died July 17 after being put in an apparent chokehold by Officer Daniel Pantaleo.

Garner was being arrested on suspicion of selling loose, untaxed cigarettes, or “loosies.”

Hours after the grand jury’s decision was revealed, bridges and tunnels as well as Times Square, Grand Central, Union Square and Rockefeller Center — where the annual Christmas tree lighting ceremony went off without a hitch — became hot spots for protesters.

PIX11 News is on air and in the streets covering this ongoing story. Follow our live blog, below, for the latest developments: