QUEENS (PIX11) — It’s a nightmare come true for anyone who has put the care of a loved one in someone else’s hands–especially for the family of a 33-year-old autistic man who died two years ago at the hands of aide workers who were supposed to keep him safe and healthy.

Rasheen Rose was sent to live at the Bernard Fineson Center, a state-run facility for people with disabilities in Queens. Severely autistic and mentally retarded, Rose lived with his family in Harlem until his mother died, and he had to be institutionalized.

“That was my mother’s biggest fear,” his sister, Shaniece, who asked not to be identified, told PIX11’s Arnold Diaz.

When Rose died, the facility told Shaniece that he had collapsed and that they tried to give him CPR. They wouldn’t let her identify his body in person, instead showing her a picture of his body, which appeared bloody.

“I was wondering, ‘Why is his mouth bloody?'” she said.

Rose would beat his chest and clap his hands, common signs of frustration for people with non-verbal autism and telltale signs of abuse, said Robert Santoriello, one of the lawyers representing the family in state and federal lawsuits seeking damages for Rose’s death.

Santoriello said that one day Rasheen became agitated when three facility workers tried to subdue him in the hall. One aide held him down while kneeling on his back for 20 minutes while seven or eight other employees gathered in the hall.

The position Rose was held in, the prone position, is not permitted at the development center, and he was essentially crushed to death.

The lawsuit alleges that the employee who restrained Rose was not properly trained, while several trained employees–including a chief of security, two doctors and two nurses–merely watched and failed to intervene. 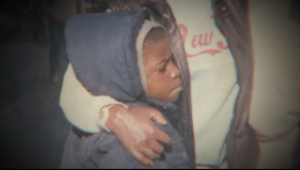 33-year-old Rasheen Rose, pictured here as a child, was “crushed to death” by an untrained aide worker, the lawsuit alleges. (Photo: family photo provided to PIX11)

In August 2012, the medical examiner listed the death as a homicide–sudden death during physical restraint. A state investigation found that Rose’s death wasn’t reported to the Department of Health for two months and that staff witnesses didn’t report use of proper restraint.

An investigation revealed that only seven out of 106 staffers were certified in state-mandated training.

To make matters worse, after Rose’s death, Shaniece was sent a bill for all the money Medicaid paid for his care at the facility.

Shaniece’s attorneys convinced the state to withdraw the bill and later discovered that Medicaid pays the facility $1.9 million per year per patient. That would calculate to $5,000 a day for Rose alone, which left Shaniece wondering, “How on earth are the people that care for him not trained?”

When the NYPD and State Office of People with Developmental Disabilities investigated Rose’s death, they concluded that no criminal conduct was committed. But the case was ruled a homicide, so it’s still open.

“Why has no one been arrested yet?” Shaniece asked. “It’s been two years. He’s not important?”