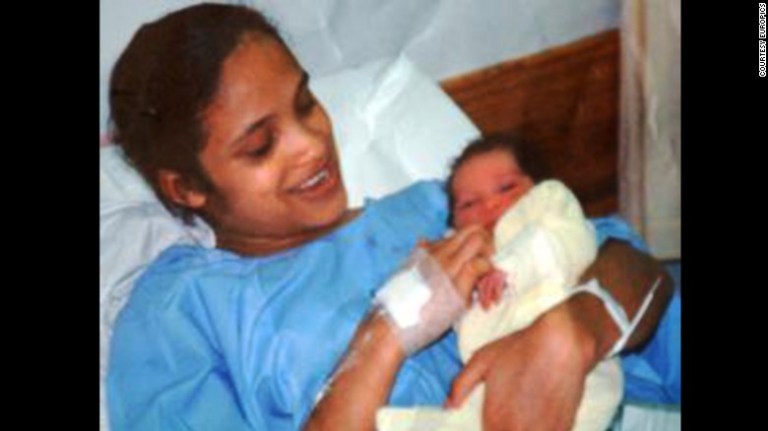 A family photo of Celeste Nurse with her daughter, Zephany, who was kidnapped from the hospital and reunited this week, after 17 years. (Photo: Europics via CNN)

(CNN) — She is being called Zephany Nurse, though it is not the name with which the 17-year-old South African girl grew up.

Zephany means “hidden by the Lord,” a fitting name for a girl who was allegedly kidnapped at birth and found thanks to an improbable coincidence.

South African Police have been mostly quiet about the case. A police spokesman, Andre Traut, confirmed that a woman was arrested last week and charged with kidnapping and falsely pretending that she was the girl’s biological mother.

Zephany was a newborn when she was taken from a Cape Town hospital in 1997. She is 17 and in her final year of school. In fact, according to local reports, that’s how she crossed paths with her biological parents, Celeste and Morne Nurse.

According to the South African Press Association, an independent news agency, students at their second daughter’s school unknowingly solved the kidnapping.

The second daughter, who was born four years after Zephany was kidnapped, started eighth grade at a Cape Town school this year, according to SAPA. Fellow students told her there was a girl in her final year of school who looked just like her, the news agency reported.

The two girls became friends, according to SAPA, and eventually, Morne Nurse made up an excuse to meet his daughter’s new friend. He, too, was taken by the similarities and contacted the police, SAPA reported.

A DNA test was done, and last week police arrested the 50-year-old woman who had raised Zephany.

The woman made an initial appearance before a judge who ruled that she would remain behind bars at least until her next hearing.

The shocking revelation has no easy conclusion.

While Zephany’s biological parents have said in interviews over the years that they never lost hope of finding her, for now, the girl is in the custody of the social services.

The Nurses have been allowed to visit Zephany for short periods, South African media reported.

And on Tuesday, Zephany herself released a statement, via the Centre for Child Law, which is representing her.

“I want to say thank you to all the people who supported me through this, for continuously praying and never giving up on looking for me,” she said. “Under the circumstances, I am doing fine.”

JAMAICA, Queens --- A man accused of several anti-Muslim assaults in South Ozone Park is being connected to yet another hate-filled incident in nearby Jamaica, police said Monday.

Back in June, the NYPD Hate Crimes Unit said police were looking for a man connected to at least two anti-Muslim assaults in Queens on Sunday night.

SEOUL, South Korea (AP) — The leaders of North and South Korea restored suspended communication channels between them and agreed to improve ties, both governments said Tuesday, amid a 2 ½ year-stalemate in U.S.-led diplomacy aimed at stripping North Korea of its nuclear weapons.

While the move could certainly help ease animosities on the Korean Peninsula, it’s unclear whether Pyongyang would go as far as to revive previous vigorous cooperation programs with Seoul and get back to the nuclear talks with Washington. Some experts say Kim merely intends to burnish his international image or use South Korea as leverage ahead of a potential resumption of talks with the U.S.

NEW YORK --- While gun violence is up in NYC, so is enforcement and intelligence, according to the Bureau of Alcohol, Tobacco, Firearms and Explosives.

Agents are focused on tracking down shooters who are connected to multiple crimes, something they've seen an increase of, ATF NY’s Assistant Special Agent in Charge Daryl McCormick said. A new partnership between the federal agency and the NYPD was launched to get guns off city streets.

Crowd stones Texas gunman to death after he kills 1, wounds 3

Delta variant accounts for over 72% of recent COVID cases in NY: Cuomo

NYC COVID vaccine mandate extended to all city workers, though some push back