LOS ANGELES — When a customer at a California KFC bit into his chicken tender, he alleges he made a disgusting deep-friend discovery: It wasn’t poultry beneath that golden crust, but a rat.

Security guard Devorise Dixon told The Randy Economy Radio Show he bought a three-piece box of tenders at a KFC in Los Angeles.

“It was very nasty. I spit it out,” Dixon said of his first bite. “I looked down at my hand and I realized that it was in the shape of a rat with a tail and everything in it.”

Dixon posted photos on his Facebook page and put the tender in the freezer. He said he returned to the restaurant with photos and his receipt.

“The manager actually freaked out, confirmed that it was a rat,” Dixon said. “She apologized for it. They actually just offered me a free meal.”

Dixon said he declined that free meal, but did get something else: a lawyer.

But shape alone is not enough to prove a chicken tender guilty of being a breaded rat — and a spokeswoman for KFC told PIX11 News they are extremely suspicious about the case. 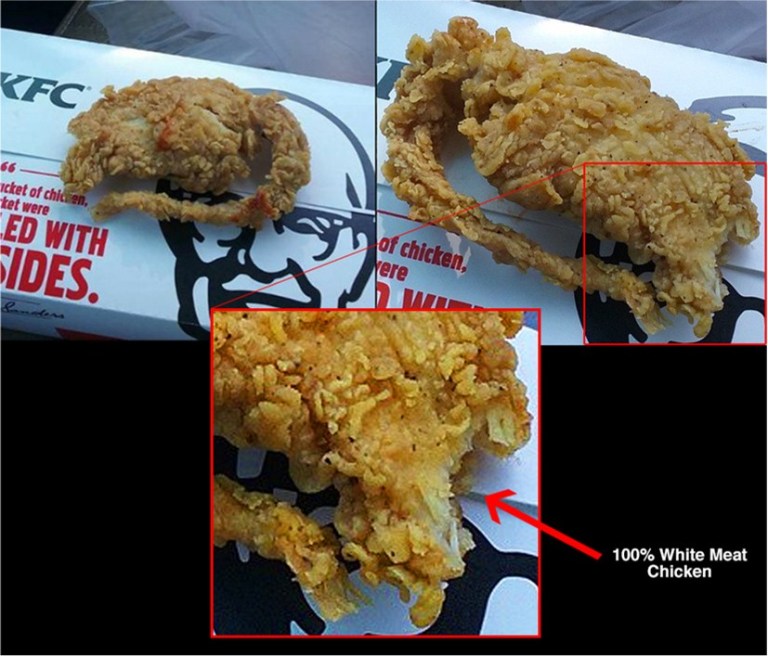 (Photo via Emanate for KFC)

“A customer has made a serious claim against KFC and refuses to cooperate in the investigation. The images the customer originally posted do not include this second angle because it clearly shows it’s a piece of hand-breaded white meat chicken,” the spokeswoman said, attaching a photo of the piece from a different angle.

“Based on this, and the fact that he refuses to allow anyone to see the product, we are left to believe that he intended to deceive the public with this hoax and we are considering all options.”

CNN’s calls to Dixon have gone unanswered, and KFC says he is “refusing to either talk to us personally or through a lawyer.” The company told CNN they’ve offered to have the tender tested at an independent lab.

Fans have been bombarding KFC’s Facebook page with links to the photo and stories about Dixon’s alleged discovery.

“We are continuing to investigate this matter…,” the company’s comment went on to say, in part. “We are aggressively trying to reach Mr. Dixon, and we request that he return to the restaurant with the product for testing, or call us at 1-800-Call-KFC.”