LOUISVILLE, Kentucky (PIX11) — A father is teaching his 10-year-old daughter a lesson for lying about her age and acting “grown.”

Kevin Jones, of Louisville, Kentucky, went to Facebook Oct. 21 to share photos of his daughter, who looks older than her age and stands at 5 feet 9 inches tall.

“Saying she is 14, 15, 16,&18 years old. She claims to be in love and going out with a boyfriend which is completely against my rules!!!! [all sic]” the angry father wrote on Facebook.

Jones also revealed his daughter has been lying about her age for a long time. The girl even made social media accounts, despite the fact that he does not allow them.

In response, Jones gave the 10-year-old girl “an age defining shirt,” which says “I am 10 years old” in the front and “5th grader” in the back. Jones did not stop at the pink shirt. He also gave her a princess backpack, pink sneakers and hair clips.

Several Facebook users praised the father for disciplining his daughter in a creative way.

“Get her!!! Nice creative way to discipline yo baby girl. It will probably be way more affective than just yelling or a punishment!! Good job!!!” one person wrote.

“There should be more parents like you. She might hate you now but she will thank you later…” another person wrote.

But others were not as supportive about the father’s actions.

“Some parents go over board with stuff. That’s why the children act up and do things because when someone is told not to do something, they normally want to do it. Maybe try not to be so strict??? [all sic]” one person wrote on the 5th grader t-shirt photo. 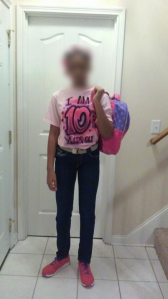 A father taught his daughter a lesson for lying about her age. (Kevin Jones/Facebook) 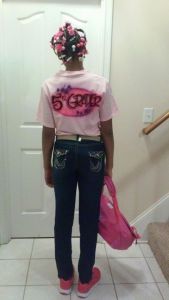 The “age defining” outfit was made to teach the girl a lesson. (Kevin Jones/Facebook)

Are abortions still legal in NY, NJ? What to know