BROOKLYN — Former NYPD Officer Peter Liang was found guilty Thursday of manslaughter and official misconduct in the shooting death of Akai Gurley, an unarmed black man who was shot dead in the dark stairwell of a Brooklyn housing development in 2014.

The jury took 17 hours to arrive at their decision and it came after Justice Danny Chun denied on Wednesday a defense request for a mistrial, saying Liang’s legal team fell “way, way short” in arguing that the prosecution in closing arguments implied the officer intentionally shot Gurley, who police determined was “a total innocent.”

Sentencing will be April 14. He could face up to 15 years in prison.

As the verdict was read, Liang dropped his head — his hands around the back of his neck — as one of his attorneys comforted him.

The highly unusual conviction of a police officer for the shooting death of a civilian means the rookie cop is automatically fired from the force. It was confirmed by an NYPD spokesman Thursday night.

NYPD Officer Peter Liang breaks down after learning he has been convicted of manslaughter and official misconduct in the shooting death of Akai Gurley.

Brooklyn District Attorney Kenneth Thompson called the 28-year-old’s death a “tragedy all over.”

“He was a son. He was a brother‎,” Thompson said after the verdict. “I told his mother, I’m sorry. There are no winners. This is a tragedy all over.”

In a news release, Thompson said the decision was not a verdict against all officers of the NYPD, but against a single officer who ignored his official training.

The case went to the jury Tuesday. The seven men and five women of the jury reached their decision on their second full day of deliberations after requesting white boards and the NYPD’s firearm and tactics guide.

On Thursday evening, about an hour before the verdict, the jury asked Justice Chun to read them the charges and legal definitions for the second time this week.

Jurors asked that the testimony of Liang and other witnesses be read back. And they asked the judge to reread the charges and replay a 911 call, which brought some of Gurley’s relatives to tears. 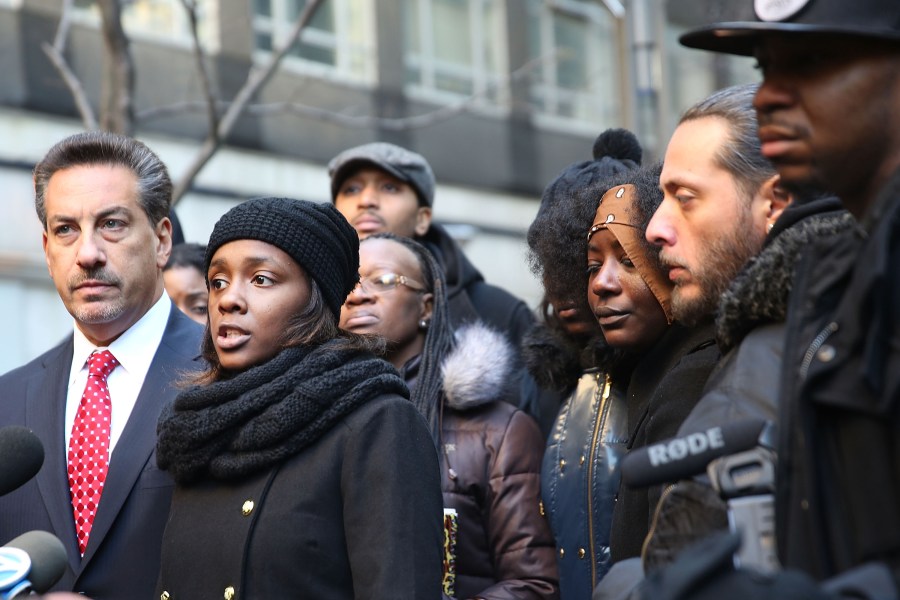 The jury also asked to handle Liang’s firearm, a request the judge allowed with the assistance of an officer.

During closing arguments, the officer’s lawyer called the fatal shooting tragic, but not a crime, stressing that Liang followed procedures.

“What happened here is a tragedy,” defense attorney Rae Koshetz said. “It’s a terrible tragedy, but it’s not a crime.”

Prosecutor Joe Alexis argued that Liang showed poor judgment, again and again, and that the shooting wasn’t an accident beyond the officer’s control. He asked jurors to hold Liang accountable.

The trial has garnered attention beyond New York because of the national controversy over allegations that police are too quick to use lethal force, sometimes against unarmed people. Outrage over police shootings or excessive force has spurred protest movements in major cities such as Chicago, Baltimore and New York.

In the most well-known cases — the fatal shootings of Michael Brown in Ferguson, Missouri, and Walter Scott in North Charleston, South Carolina, and the death of Freddie Gray while in police custody in Baltimore — the victims were unarmed black men.

Gurley’s death came amid strained relations between police and the community, just a few months after the death of Eric Garner as police tried to arrest him on Staten Island. The chokehold death of Garner, an unarmed 43-year-old man, sparked street protests, a review of police procedures and calls for a federal civil rights investigation. A grand jury declined to prosecute the officer.

MOUNT EDEN, the Bronx — The NYPD on Wednesday released video of two suspects attacking and robbing a man on a Bronx street, authorities said.

Police said it happened around 6 a.m. back on July 7, near the corner of Jerome Avenue and East 171st Street in the Mount Eden section of the borough.

New York City officials announced that the city will give $100 debit cards to New Yorkers who get their first COVID shot at a city-run vaccination site.

Governor Phil Murphy and New Jersey Department of Health Commissioner Judy Persichilli strongly recommended that both vaccinated and unvaccinated residents wear masks in indoor settings when there is increased risk.

Tsunami warning issued for parts of Alaska after 8.2 quake

LI teen hailed as hero for warning neighbors about fire