PHOENIX (PIX11/AP) — A Phoenix woman accused of leaving her children in a hot car while she went on a job interview is scheduled for a Dec. 10 trial after she failed to meet a key condition of deal that would have allowed charges against her to be dismissed.

Shanesha Taylor missed a Thursday deadline for putting $40,000 into trust funds to benefit her children.

The child-abuse charges would have been dismissed if Taylor had funded the trusts and fulfilled other requirements.

People donated $114,000 to Taylor after seeing her teary mug shot when she was arrested March 20 after leaving her two young sons in her car for about 45 minutes while she interviewed for a job in Scottsdale. 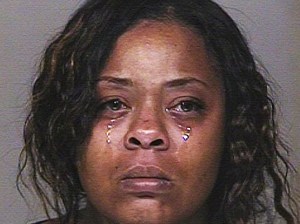 Shanesha Taylor did not put the thousands in donations into a trust fund for her children, as ordered by the court following an arrest for leaving two of her kids in a hot car in Arizona. (Scottsdale PD)

So where is the money now?

“We had someone call my office and alert her attorney to the fact that she spent $6,000 at a music studio in Tempe to finish her baby daddy’s rap album,” Reverend Jarrett Maupin told ABC15.  “That’s not what people gave her that money for.”

Maupin claims he set up multiple job interviews that were “Taylor-ready,” but the mother of two didn’t even show up.

Taylor denied having spoken to Maupin since July 21st, and called anything he said “libel or slander.”

Taylor’s attorney, Benjamin Taylor, has asked to withdraw as her attorney.