NEW YORK — The death of George Costanza’s fiancee on “Seinfeld” was one of the more memorable episodes, perhaps because it was just so bizarre, and now actor Jason Alexander has revealed the real reason why Susan Biddle Ross, played by Heidi Swedberg, had to go.

Susan died in the final episode of Season 7 after licking the toxic adhesive on the cheap wedding invitation envelopes George chose.

Although she may not have been the most likable character on the show, the episode generated backlash from some fans who were irked by the indifferent reactions of Jerry, George, Elaine and Kramer.  After George breaks the news, “she’s gone,” the gang briefly laments her death before heading out for coffee.

When asked about fan reactions, George later called the moment “unquestionably funny” but also “one of the coldest moment ever played on a television show.” 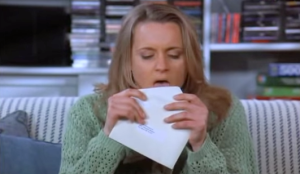 Toxic glue from the cheap wedding invitations chosen by George killed Susan in the final episode of Season 7.

Alexander says she is a wonderful person in real life, but the comedic chemistry just wasn’t there.

“I couldn’t figure out how to play off of her,” he said in a “Howard Stern Show” interview Thursday.  “Her instincts for doing a scene, where the comedy was, and mine, were always misfiring.  She would do something, and I would go, ‘OK, I see what she’s going to do, I’ll adjust to her.’  And then it would change.”

He recalled telling co-stars Jerry Seinfeld and Julia Louis Dreyfus, and finding little empathy at first — until they had to act alongside Susan.  Alexander recalled both Seinfeld and Dreyfus saying afterward, “You know what?  It’s f—ing impossible!”

Alexander said in a 2014 interview that Susan’s role as his fiancee developed out of a single scene in the fourth season when George and Jerry try to pitch their sitcom idea about nothing to NBC.  Swedberg was cast based largely on her resemblance of an actual NBC executive at the time, he said, and no one planned on her being in the show for more than that episode.

“Then George makes some reference after he has imploded in the room and Jerry’s chastising him at the reception desk, he goes, ‘I think the girl liked me,’” Alexander said.  “Somehow that became enough for this connective tissue to make her the girl that George was going to have a relationship with.”

When George spoke with “Seinfeld” creator Larry David and said he had no chemistry with Swedberg and wondered why he had to work with her, David told him, “That’s why.” Alexander remembered.

“For whatever reason, I, Jason, found Heidi’s comedy instincts to be the opposite of mine,” Alexander said.  “So whatever I was trying to get going in a season, I always felt like I was punching into Jello, I couldn’t get the right responses back.  There was something in the dynamic between her as Susan and me as George that I couldn’t ever find my way,  and it created something wonderful, so maybe that’s what it was meant to be.”