NEW YORK — A Puerto Rican family who evacuated when Hurricane Maria destroyed their home now lives in FEMA housing in New York — but as of June 30, they will have to move out — and they have nowhere to go.

Hurricane Maria caused catastrophic damage to Puerto Rico when it hit as a Category 4 storm Sept. 20 with winds of up to 154 mph. It knocked out power for the whole island and caused damage estimated at more than $100 billion. Approximately 75 percent of power distribution lines were destroyed, and more than 20,000 power customers remain in the dark.

Liz Cruz, her husband, and their three children, had to leave their home, which suffered significant flood and wind damage.

Her oldest daughter, Yadaliz, recalled what it was like to be in Puerto Rico during the storms.

“I tried to keep them [my sisters] calm, I’ve got severe anxiety, but knew how to manage the situation,” Yadaliz said. “The house was flooding, so we got brooms and started shoving water downstairs.”

The family of five has been living in a hotel in New York, paid for by FEMA, since Dec. 7, 2017. But by the end of the June, they have to move out.

“I don’t have a place to go,” Cruz said. Her husband has been working since their move to New York, and she works part-time at New York Disaster Interfaith Services (NYDIS), but it’s not enough.

With no kitchen at the hotel, Cruz says she’s not able to cook and they end up eating microwavable foods like macaroni and cheese, frozen pizza and ramen noodles.

New York Disaster Interfaith Services is one agency that has remained all these months later to help the thousands of families who have sought refuge in New York.

The agency, housed at the Church of Holy Agony at 101st Street and Third Avenue, is open Tuesdays and Thursdays.

But it’s not over yet. 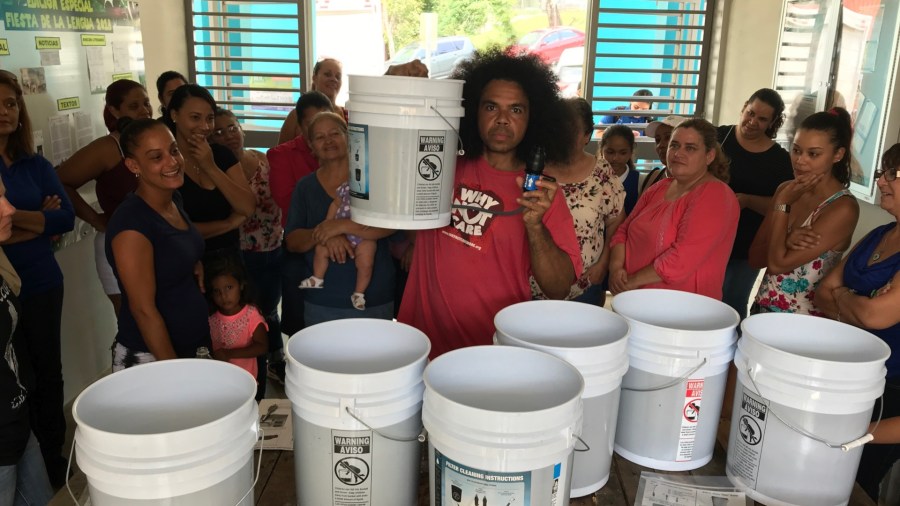 Federal and local officials said Thursday that they are stockpiling radios, food, water and generators in Puerto Rico and demanding rigorous emergency training to prepare the U.S. territory for dealing with any catastrophic storm as the Atlantic hurricane season approaches.

In the wake of the devastation from Hurricane Maria, emergency plans have been changed to warn the island’s 3.3 million people that they need to have enough supplies to survive 10 days.

“After Maria, we learned that three days is not enough,” said Carlos Acevedo, interim commissioner of Puerto Rico’s emergency management agency. “Now the minimum is 10 days … 10 days of supplies, 10 days of gasoline, 10 days of everything.”

Relief worker Power Malu just got back from one his many trips to Puerto Rico and said there’s still a lot to be done.

While some metropolitan areas have recovered, the rural parts of the country are still without power — and without water.

White buckets are being rigged to use as water filtering systems. Solar-power generators are used to produce electricity.

When Malu is in Puerto Rico, his team visits dozens of towns and schools, doing what they can for the people there.

At one school, they were able to generate power to the computer lab, so students could use it again. At another school, Malu brought in music and guitars.

“They were extremely excited,” Malu said. “And as we all know music can be used to bring people together in times of difficulty.”

As another hurricane season lurks just around the corner, Malu is urging people to get involved.

“People think everything is fine, but it’s not,” Malu said. “Please, please get involved.”

Malu has started a GoFundMe page for the cause.

The agency will have 10 million liters of water on site, compared to the 800,000 liters it had prior to Maria, and seven times the amount of food it had previously. It is also bringing in 130 emergency high-capacity generators.

For the first time in a U.S. jurisdiction, local officials also will receive the type of training that only federal emergency coordinators undergo, he said. In addition, the U.S. Defense Department will hold a full-scale disaster exercise in Puerto Rico ahead of the June 1 start of the hurricane season.