Researchers from the Weill Cornell Medical College in Manhattan spent 18 months gathering DNA samples from subway stations all around the city to identify the types of bacteria floating around our public transit system.

The results, published to the Wall Street Journal, showed genetic material from 15,152 different species. While most was harmless or unidentified, data showed almost half of the specimens collected belonged to bacteria. 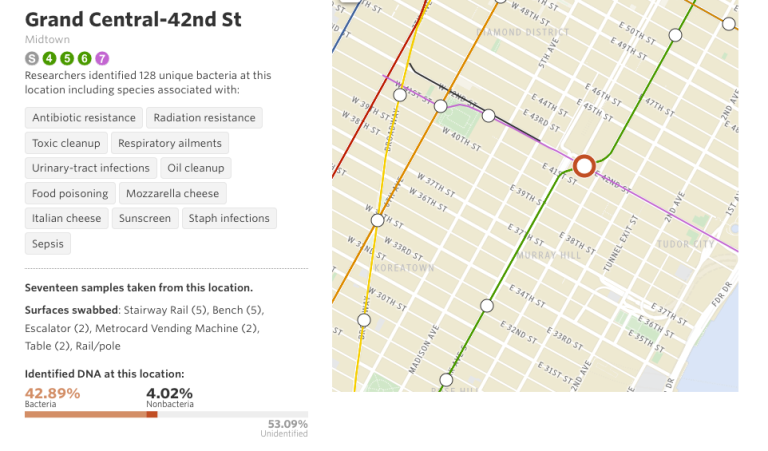 So far, a total of 67 species of bacteria associated with illness have been located. According to the report, germs found ranged from ailments like the common cold to deadly bacteria from meningitis and the bubonic plague.

An interactive map highlights each subway stop and the bacteria found. To collect the DNA, researchers swabbed multiple areas around the subway stations including turnstiles, Metrocard vending machines, stairway rails and benches.

The data breaks down the types of bacteria found, what was swabbed and a percentage of bacteria, non-bacteria and unidentified DNA.

Not all bacteria found came from illnesses. Several samples related to the surrounding businesses, namely food joints.  The study found bacteria associated with mozzarella cheese at 151 stations. Traces of chickpeas were also detected on multiple subway platforms and benches.

A spokeswoman for the NYC Department of Health and Mental Hygiene said the study is “deeply flawed.”

“The interpretation of the results is misleading, and the researchers failed to offer alternative, much more plausible explanations for their findings, which is common best practice for scientific papers,” a department spokeswoman said in a written statement.

Traveling libraries have evolved since the idea was first conceptualized; these days, book mobiles expand the reach of traditional libraries by transporting books to potential readers and to provide library service to those in underserved communities and circumstances.

Queens Public Library has launched its first-ever Wellness Tour with QPL Mobile Library hitting the roads of the Rockaways and Southeast Queens to provide local residents with free access to facts and information about good health and self-care amid the ongoing COVID-19 pandemic.

ALBANY, N.Y. (NEWS10) -- A member of the New York State Police was indicted on murder charges after the death of an 11-year-old Brooklyn girl.

The indictment against Christopher Baldner, announced by New York Attorney General Letitia James on Wednesday, alleges that Baldner, while on patrol on the New York State Thruway, used his police vehicle to ram a car, resulting in the death of a child.

Yes, Alexa is recording you. Here’s how to delete recordings from your Amazon Echo

Felony charges dropped against man who underpaid for a bottle of Mountain Dew by 43 cents.