BAY COUNTY, Fla. (PIX11) – Shocking cell phone footage of the alleged gang rape of a teen in Panama City Beach Florida shows crowds of spring break revelers steps from the victim, but none of them intervening.  The video, found during the investigation of a related crime, has already led to two arrests, and a local sheriff is vowing more.

“It’s probably one of the most disgusting, sickening things I’ve seen on a Panama City beach,” said Bay County Sheriff Frank McKeithen.  “This is not the first video we’ve recovered, it’s not the second video, it’s not the third video (and) there’s a number of videos with things similar to this.  I can only imagine how many we haven’t recovered.”

Police have released a small portion of the video, which is so graphic it had to be blurred.  The footage shows the 19-year-old woman, apparently incapacitated, in a chair on the beach behind the Spinnaker Beach Club,  being sexually assaulted by one man after another in broad daylight, according to police.  As the attacks occur, the suspects can be heard joking about how “she isn’t going to know,” as they ignore her feeble attempts to push them off her, according to the Panama City News Herald.  McKeithen likened the attack to “wild animals preying on a carcass laying in the woods.”

UPDATED STORY: ‘Spring break as we know it is over’

Police tracked down the victim, but she told detectives she didn’t remember anything the next day, and thinks she may have been drugged.  “She knows something happened, but she doesn’t know what happened,” McKeithen said. 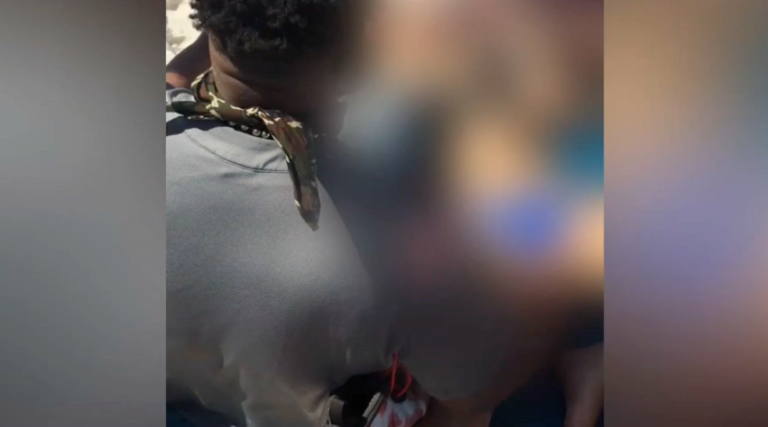 Police found the video on a witness’ phone while investigating a shooting in Troy, Alabama, and turned it over to Panama City investigators.  Two Troy University students accused of assaulting the teen, 23-year-old Ryan Austin Calhoun, of Mobile, Ala., and 22-year-old Delonte Martistee, of Bainbridge, Ga., now face charges of sexual battery by multiple perpetrators.

On Saturday, Calhoun posted $50,000 bond and was released from Bay County Jail, where Martistee, as of Monday, was still being held.  Martistee is a senior and track star for Troy University.  Both men have been temporarily suspended from academic and athletic activities, according to school officials.

“Within ten feet of where this is happening there are hundreds of people standing there watching, looking, seeing, hearing what’s going on and yet our culture and our society and our young people have got to the point where obviously it’s acceptable somewhere, but it’s not acceptable in Bay County,” McKeithen said.

Panama City Beach has long been a destination for spring break revelers, but authorities are fed up with the spike in criminal activity that comes from hosting the hordes of party-goers.  One official at the Bay County Sheriff’s Office compared spring break to a cancerous “tumor” that can spread to the rest of the body, affecting residents and local businesses.

Sheriff McKeithen posted on his Facebook page that the investigation continues, and that additional arrests are expected.