STATEN ISLAND (PIX11) — In a case that sparked days of protest and calls for reform of the New York Police Department, a grand jury has decided not to indict an officer in the chokehold death of Eric Garner.

Officer Daniel Pantaleo will not face criminal charges in the chokehold death of Garner, who died July 17 while being arrested outside a Staten Island convenience store for allegedly selling loose cigarettes, or “loosies.”

Ben Garner, Eric’s father, showed up at the Staten Island District Attorney’s office in tears, unable to speak with the media.  According to those close to him, just hours before he was hopeful there would be “justice for my son.”

“I don’t think we even needed a grand jury, we already had probable cause,” Garner’s mother, Gwen Carr, told PIX11 in an interview Wednesday morning.  She added that regardless of the decision, “It’s OK to protest but we want to do it in a civil manner, we don’t want to burn up our cities, we don’t want to tear down our cities.”

Staten Island District Attorney Daniel Donovan expressed his condolences to Garner’s family and loved ones, saying in a statement they “have consistently carried themselves with grace during the past four months.”

Donovan added that, according to New York law, he was not permitted to disclose any of details of the grand jury.  He says he has filed an application “seeking authorization to publicly release specific information in connection with this grand jury investigation.”

The lawyer for the Garner family, Jonathan Moore, said he was “astonished by the decision.”

The case inspired outrage over officers’ behavior, especially when it comes to the apparent use of a long-prohibited chokehold.

Pantaleo issued the following statement regarding the jury decision, saying he never intended to cause harm.

“I became a police officer to help people and to protect those who can’t protect themselves.  It is never my intention to harm anyone and I feel very bad about the death of Mr. Garner.  My family and I include him and his family in our prayers and I hope that they will accept my personal condolences for their loss.” 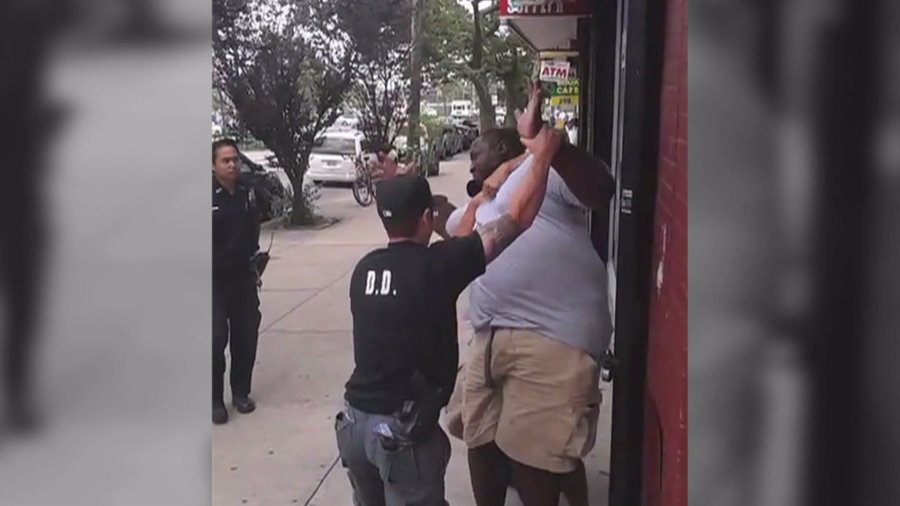 In a statement from the Police Benevolent Association, President J. Lynch also focused on Pantaleo’s intentions: “There was a loss of life that both a family and a police officer will always have to live with.  It is clear that the officer’s intention was to do nothing more than take Mr. Garner into custody as instructed and that he used the take down technique that he learned in the academy when Mr. Garner refused.”

Mayor de Blasio called it a “deeply emotional day,” adding that New York has a “proud and powerful tradition of expressing ourselves through non-violent protest.”

De Blasio promised an additional NYPD internal investigation, along with the US Attorney’s investigation.  “Should the federal government choose to act, we stand ready to cooperate.”

Namely, that they do not think Pantaleo intended to kill Garner; he did not intend to cause Garner serious physical injury; and he did not act in a way that was criminally reckless or negligent.

Shortly after the fatal encounter, Pantaleo was stripped of his gun and badge and put on modified duty. Four EMS workers who responded to the scene but apparently did not try to resuscitate Garner were suspended without pay.

Called “barbaric” by his family, Garner’s arrest was caught on camera by an onlooker. That widely watched footage shows 43-year-old Garner telling officers to leave him alone and refusing to be handcuffed.

Pantaleo responded by wrapping his arm around Garner’s neck in an apparent chokehold, a move banned under NYPD policy for some 20 years.

Garner, who was heavyset and had asthma, could be heard gasping, repeating, “I can’t breathe.” Minutes later, he was dead.

The city Medical Examiner’s Office ruled Garner’s death a homicide and found that a chokehold contributed to it. According to the autopsy, Garner died of “compression of neck (chokehold), compression of chest and prone positioning during physical restraint by police.”

But police union officials and Pantaleo’s lawyer have argued that the officer used a takedown move taught by the police department, not a chokehold, and that Garner’s poor health was the main reason he died.

The New York verdict comes shortly after a grand jury in Ferguson, Missouri, made its decision in another high-profile case involving the death of an unarmed person at the hands of a police officer.

On Nov. 24, a grand jury declined to charge former officer Darren Wilson in the shooting death of 18-year-old Michael Brown, who, like Garner, was unarmed when he was confronted by police and later died.

That decision spurred days of unrest across the country and in Ferguson, where some demonstrations became violent with crowds torching businesses and cars in the St. Louis suburb.

Both cases, that of Brown and Garner, have sparked calls for federal prosecutors to bring civil rights charges against police.

In October, Garner’s family filed a notice of claim to sue the city, its police department and six police officers for $75 million.

Actress Lisa Banes dies after being struck by scooter in UWS hit-and-run: police