“We are not going to allow this symbol to divide us any longer,” Haley said.  “While an integral part of our past, the Confederate flag does not represent the future of our state.”

Haley addressed the stark difference of opinion about the Confederate flag that exists among many South Carolinians, and encouraged those who want to display it on their private property to do so. 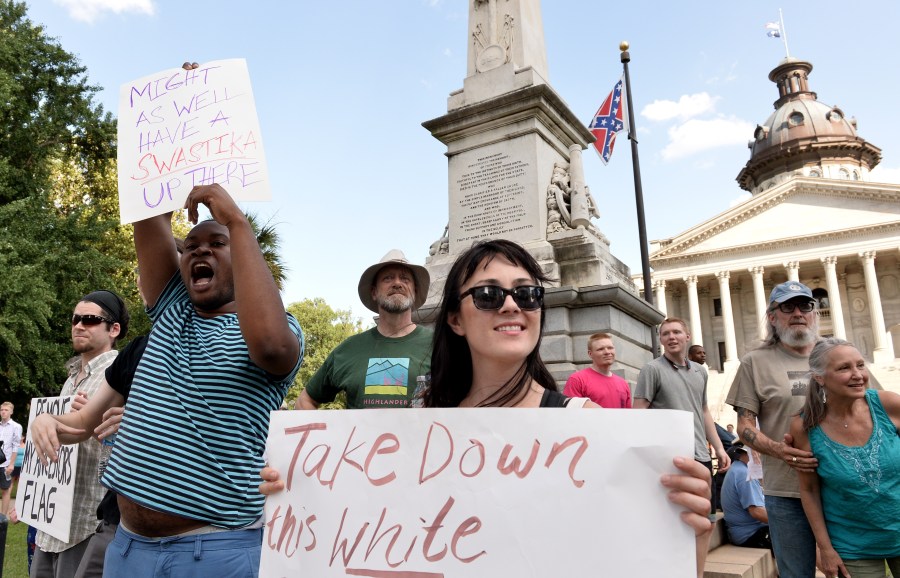 Hundreds of people gather for a protest rally against the Confederate flag in Columbia, South Carolina on June 20, 2015. The racially divisive Confederate battle flag flew at full-mast despite others flying at half-staff in South Carolina after the killing of nine black people in an historic African-American church in Charleston on June 17. Dylann Roof, the 21-year-old white male suspected of carrying out the Emanuel African Episcopal Methodist Church bloodbath, was one of many southern Americans who identified with the 13-star saltire in red, white and blue. AFP PHOTO/MLADEN ANTONOV (Photo credit should read MLADEN ANTONOV/AFP/Getty Images)

“For many people in our state the flag stands for things that are noble,” Haley, a Republican said. “At the same time, for many others in South Carolina the flag is a … deeply hateful symbol. The events of last week call on us to look at this in a different way. Today, we are here in a moment of unity in our state, without ill will to say it’s time to remove the flag from our capitol grounds.”

The statement comes after Sen. Lindsey Graham’s decision to take the lead on calling for the flag’s removal after a deadly, racially-motivated shooting that killed nine African-Americans last week — reigniting a debate that is returning to the upper echelons of South Carolina politics.

And just as local officials and civil rights activists have ratcheted up their calls to remove the flag, Graham in the past few days has been quietly urging fellow South Carolina politicians to take action, the source close to Graham told CNN.

“We cannot have the Confederate flag waving on the grounds of the state capitol,” NAACP president and South Carolina native Cornell William Brooks said Friday during a press conference. “That symbol has to come down. That symbol must be removed from our state capitol.”

The debate took new meaning after images surfaced online of white supremacist and avowed church shooter Dylan Roof holding a Confederate flag and a gun. Roof, 21, confessed to law enforcement that he carried out the killing, telling them he wanted to start a “race war.”

Haley has previously rebuffed efforts to remove the flag from the grounds of the state legislature and has spoken out in support of the compromise in 2000 that saw the confederate flag removed from the top of the state capital dome and moved to a memorial to Confederate soldiers just a few hundred feet away.

And Graham last week said in an interview with CNN that the Confederate flag is “part of who we are,” but said South Carolina needed to make sure that the 2000 compromise “works here.

Missing NJ man feared someone was following him