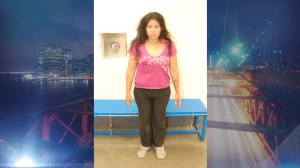 Carmen Montelongo after her 2011 arrest in connection with the stabbing death and dismemberment of her longtime boyfriend. She was sentenced Sept. 29, 2014, to 26 years to life in the case. (Photo: San Bernardino County District Attorney’s Office)

RIVERSIDE, Calif. (PIX11) – A Southern California woman was sentenced Monday to 26 years to life in prison for stabbing her boyfriend to death, dismembering his body and carting around his remains in a trash can.

Carmen Montelongo, 54, of Riverside, was convicted in August of stabbing her longtime boyfriend twice in the chest and 22 times in the back in his Diamond Bar home. A jury took three days to hand down their guilty verdict, according to the San Bernardino County District Attorney’s Office.

She ripped up the carpet and removed tiles to hide the evidence of her “heinous” crime,” then carved up his lifeless body and scattering its parts in two cities, the San Bernardino County DA said.

Montelongo was arrested in 2011 after she was spotted pushing a trash can down a residential street. That trash can contained the remains of her slain boyfriend, 62-year-old Samuel Wiggins, who disappeared some five weeks prior, prosecutors said.

Wiggins’ family reported him missing and investigators turned their attention his longtime girlfriend.

Prosecutors said Montelongo tried to stall detectives by saying she had been in regular contact with the victim.

She took that time to dismember Wiggins’ body, dumping his head and arms in potted plants in Bell Gardens and tossing his legs and torso about 40 miles away in Ontario where she was ultimately arrested.

In the weeks before her arrest, Montelongo was living in the victim’s home and using his accounts, prosecutors said.

Graduating? Here’s how to get free doughnuts to celebrate

(KTVX) -- Are you a high school or college graduate this spring? Krispy Kreme will give you free doughnuts to celebrate.

Last year amid the COVID-19 pandemic, Krispy Kreme offered the many graduates who didn't get to walk the stage a sweet way to celebrate their graduation.

TAMPA, Fla. --- A unique NASA launch from Virginia may be visible from New York and New Jersey on Saturday night.

This particular launch will study how energy and momentum are transported through different regions in space. A suborbital NASA Black Brant XII sounding rocket will launch the experiment, named KiNet-X, from NASA's Wallops Flight Facility in Virginia toward Bermuda.

Tails & trails: Tips for hiking with your dog

Spring has spring and summer is on the way! You're ready to get outside, and so is your dog.

There are many dog-friendly parks and hiking trails in the tri-state area, but before you head out for the first time, there is some important information you need to know for both you and your pup.

Superfoods to add to your diet

‘We still have a long way to go’: Biden address April jobs report as hiring slows

St. Vincent volcano: How to help residents affected by eruptions

Plastic surgery demand has dipped during pandemic, ‘butt’ not in all areas

Pandemic puppies being returned at an alarming rate, shelter says