The machinery, being used for the East Side Access project, was being operated by a contractor above ground at 23rd Street and 41st Avenue near the 21st St. Station in Long Island City. 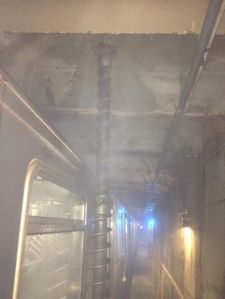 The drill bit, measuring 10 inches in diameter, broke through the tunnel’s roof at about 11:45 a.m., grazing the top and side of a Queens-bound ‘F’ train that had just left the Queensbridge station. Approximately 800 people aboard, according to the MTA.

No one was injured, and passengers were led to the station via a relief train.

“F” train rider Joel Kellum told PIX 11, “My concern would be for the construction people they need to be more careful. You can’t blame the MTA, you can blame a lot of things on the MTA but not this one.”

Construction work has since been suspended in the area pending an investigation by the MTA.

“They were off the mark,” MTA spokesman Kevin Ortiz told the News of the incident. “Obviously this is under investigation, and we’ll take it from there.”

ST. LOUIS - Police and firefighters came together to throw a birthday parade for a six-year-old girl who has been isolated from her friends because of a severe medical condition.

Police Chief Jason Armstrong from the City of Ferguson Police Department in Missouri met the Mason family just a few days ago but organized a huge parade with police cars, fire trucks and others in the community to celebrate Paydenn Mason's sixth birthday.

NEW YORK — Fresh off the Senate’s passage of a $1.9 trillion COVID-19 rescue package, Senate Majority Leader Chuck Schumer was back in New York to promote the plan's impact on his home state.

Schumer said Sunday that “help is on the way” to beleaguered New Yorkers. He detailed aid that he said would be headed to schools, small businesses, museums, restaurants, theaters and local governments as part of the relief package.

OUAGADOUGOU, Burkina Faso (AP) — A series of explosions at a military barracks in Equatorial Guinea killed at least 20 people and wounded more than 600 others on Sunday, authorities said.

President Teodoro Obiang Nguema said the explosion at 4 p.m. local time was due to the “negligent handling of dynamite” in the military barracks located in the neighborhood of Mondong Nkuantoma in Bata.