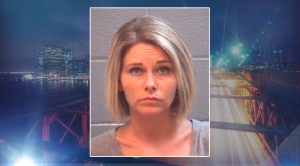 EVANS, Georgia (PIX11) – A Georgia mother faces multiple charges after allegedly allowing her teen daughter and the girl’s friends to throw a drunken party complete with a game of naked Twister that led to various sex acts.

Police arrested 35-year-old Rachel Lenhardt on two counts of contributing to the delinquency of a minor after allegedly allowing the teens drink alcohol and smoke marijuana while they partied at her Evans home.  Lenhardt’s Alcoholic Anonymous sponsor called police Saturday to report her.

The sponsor told police Lenhardt, a bridal shop employee who had been sober for four days, had invited her over for coffee to try to plan her continued sobriety.  Both women attend the same local Mormon church where Lenhardt attends a sexual addiction therapy group.

During the meeting, Lenhardt revealed that her kids — ages 4, 6, 8, 10 and 16 — had been taken away from her recently after an incident at her house prompted an emergency case review.

She explained that the incident started when her 16-year-old daughter and other children were with their father.  Her daughter texted to find out if she could come over “to party” with some of the teen’s friends, according to the sheriff’s report.

After Twister, “the party continued” in Lehnardt’s hot tub, until she went to sleep around 3:30 a.m.  She awoke to find someone having sex with her, according to the report, and realized it was her daughter’s 16-year-old boyfriend.

The investigation report states Lenhardt told her sponsor that:

“She and her daughter had spoken and that her daughter ‘felt guilty because the 16 yr old was 10 inches long and huge, and if she had just been able to take it he wouldn’t have needed to rape her mother.’”

Lenhardt is not cooperating with police, and no rape charges have been filed against the 16-year-old, the New York Daily News reports.  As the age of consent is 16 in Georgia, she only faces charges for allowing the teens to drink and smoke marijuana in her home.

Lehnardt was arrested Monday and released from Columbia County Detention Center on $3,200 bond.