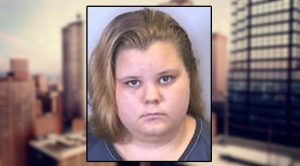 FLORIDA  — A young woman is facing charges after officers uncovered multiple cellphone photos of her receiving oral sex from a pit bull, according to officials.

Bradenton police said they uncovered the photos while working on a sexual battery investigation by accessing the audio manager application on 18-year-old Ashley Miller’s phone.  Detectives found the incriminating images in a folder called “2-face fun,” according to a police report obtained by The Smoking Gun.  “Detective Bunch accessed the picture folder, ‘2-face fun’ and observed seventeen photos of a canine performing oral sex on an unknown white female.”

The detectives went to Miller’s home to ask her about the dog, whose name is 2-face, but didn’t see any sign of the animal.  Miller told police the she kept the dog at her grandmother’s house and admitted to engaging in oral sex with the pup.

“Miller explained that she would call 2-face into her room, take her pants off, open her legs and 2-face would lick he(r) vagina,” the police report reads.  “Miller believes 2-face has licked her vagina approximately thirty to forty times.”

She admitted to detectives that 2-face wasn’t the first dog she had allowed to perform sex acts on her — she had a Rottweiler-pit bull mix named Scarface do the same thing years earlier, police said.  She also claimed that “she did not have to push her to do it,” the police said.

The dog was taken to a veterinarian for an evaluation and was pronounced healthy, according to the Bradenton Herald.  Miller faces two counts of misdemeanor sexual activities involving animals.  She is awaiting a hearing after posting a $1,000 bond.

Bestiality was legal in Florida until the state finally passed a law forbidding sex with animals in 2011.  The wording of the new law was challenged a year later after a man claimed that, since there was no penetration, he couldn’t be charged for having oral sex with his dog.