MARTIN COUNTY, Fla. — A Florida man was looking to buy some weed, but accidentally texted the captain of the Martin County Sheriff’s Office Narcotics Unit to get his “hook up” and was busted.

Wiliam Lamberson, 29, was arrested and charged on suspicion of possession of a controlled substance with the intent to sell, according to the Martin County Sheriff’s office. Lamberson thought he was texting friends to get the “hook up” in late August, but was actually texting Capt. Brian Bergen of MCSO’s Narcotics Unit.

Bergen initially asked Lamberson who he was and to send a photo of himself. Lamberson texted back and said the two met at a 7-Eleven. He then asked if Bergen had any weed he could buy from him.  The captain played along and continued to text the suspect for several days.

The sheriff’s office posted the entire exchange on Facebook in a post titled “WHEN TEXTING GOES WRONG.” 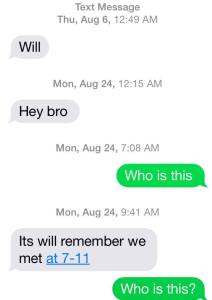 The captain texted Lamberson, “You got any hooks for sum blow?” Lamberson texted back, “OK I gotchu bro.” The two agreed to meet up on Sept. 1 to complete the transaction.

Instead of earning some cash on his drug trade, Lamberson was arrested by narcotics detectives, officials said.

Enter to be our Morning Show ‘Fan of the Day’