WOODBRIDGE, N.J. — At least two people are dead and six are injured after a fiery pile-up crash in on Route 440 in New Jersey Friday, according to police.

Reports of a multi-vehicle crash on the southbound side of Route 440, near Woodbridge Avenue, were made around 6:15 a.m.

At least seven vehicles appeared to be involved in the incident, AIR11 footage showed. Six of the vehicles remained mangled together on the roadway some two hours later, while one was stopped several yards away.

Of the seven vehicles, four were completely burned out.

Six others were transported to the hospital with non-life threatening injuries, police said. Most of them had been released by Friday evening.

Three southbound Route 440 lanes were closed for hours after the crash, slowing the commute on Routes 440 and 287, and on the New Jersey Turnpike. 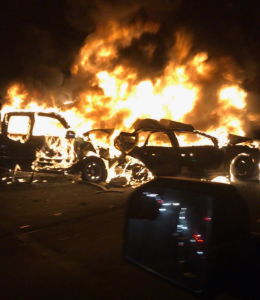 AIR11 is over the scene: