PIX11  spent time with the FDNY’s specialized HazMat team as they revealed how firefighters would respond to a potential chemical attack on the New York City subway system.

Their training has transformed over the past 14 years, since the tragic attacks of Sept. 11, 2001. That terrible day, the team from Squad 288 and HazMat 1 did what so many of New York’s bravest did.

“The HazMat team operated in the towers, monitoring the environment to see if there was a chemical release as part of the attacks then continued fire operations in the towers” Chief Nick DelRe remembered.

Nineteen members from the those two units perished. Now, their legacies live on — and so does the type of training they endured to save the lives of others. 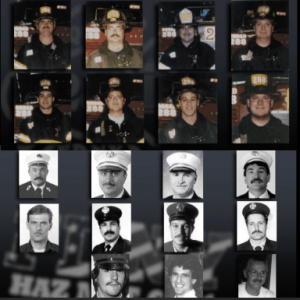 Step one is gearing up once a potential call comes in, a 10-minute process. Special suits protect the firefighters from a chemical or biological attack to outbreaks like Ebola.

“The suits have changed dramatically since 9/11,” Hansen said. “The old Level A suits [were] fully encapsulated, very bulky, cumbersome and hard to walk around in. These are a little more user friendly.”

Once they are suited up and their mission begins, they hold sensors to determine what chemicals could be inside.

“Here we’re in a training prop of a NYC subway tunnel where we run this training exercise based on a mass casualty event occurring in the subway system,” DelRe said as he demonstrated the procedure. “They got the information that there’s a down firefighter, they’re performing the rescue removal of that down firefighter.”

Once they rescue the people inside, the attention turns to keeping those individuals safe.

“Right now they’re giving a medical anecdote and administering respiratory aide,” DelRe said as firefighters took care of the dummy victim. “Now this is the decontamination process, where the victim gets flushed, stripped and flushed again then more advanced medical treatment and transport to an emergency room takes place.”

It’s a grueling exercise and constant reminder of what these men and women do every single day.

“People usually talk about the tragedy of that day, but I always like to point out that it was the fire services greatest rescue effort that ever took place,” DelRe said. “We rescued probably 10,000 people in each of those buildings.”

Rent relief in NJ: Eligible Jersey City residents can apply for up to $10K

Time is on the side of Jersey City residents who are having trouble paying their rent.

The next phase of the COVID rent relief program is being rolled out.

‘I was wrong’ in opposing gay marriage in past, Liz Cheney says

WASHINGTON (AP) — Rep. Liz Cheney says she was wrong to oppose gay marriage in the past, a stand that once split her family.

Cheney, R-Wyo., a fierce critic of fellow Republican Donald Trump, also tells CBS News' “60 Minutes” that she views her reelection campaign as the most important House race in the nation as forces aligned with the former president try to unseat her. She voted to impeach Trump over his role in the Jan. 6 riot at the U.S. Capitol.

The MTA first informed customers about the incident at the Vernon Blvd-Jackson Av No. 7 subway station just before 6 a.m.

Tempted to take expired medicines? Here’s what you need to know

Are your old video games worth anything?

Rent relief in NJ: Eligible Jersey City residents can apply for up to $10K