FLUSHING, Queens — Speed may have been a factor in a deadly collision in Flushing early Monday between an MTA bus and a private charter bus.

National Transportation Safety Board officials are headed to the scene, at Main Street and Northern Boulevard, to join the investigation, according to a spokesperson.

Officials have not definitely said what caused the crash.

This is what we know about the collision so far:

An MTA bus with 15 people on board collided with a private charter bus operated by Dahlia Group Inc. around 6:18 a.m.

The Dahlia bus was traveling east on Northern Boulevard, and the MTA bus was headed north on Main Street when the city bus attempted to turn right onto Northern, officials said at a morning news conference.

That’s when the buses collided, sending one into a building that then briefly caught fire.

Speed appears to be a factor, according to Joe Lhota, chairman of the Metropolitan Transportation Authority.

“These buses spun around. That requires an enormous amount of speed,” Lhota said.

PIX11 has obtained exclusive images of the Dahlia bus’ speedometer, which shows it stuck at 60 mph. Investigators said they are cataloging it as evidence.

The charter bus company involved in the collision, the Dahlia Group, has a history of speeding violations and at least two fatal crashes in its background.

A source told PIX11 News that the Dahli driver, Mong, was fired from the MTA in 2015.

While Lhota noted speed during a morning news conference, Mayor Bill de Blasio said the investigation is ongoing, and it is not yet clear who, if anyone, is at fault.

Sixteen people were hospitalized, some in critical condition, after the crash.

The MTA bus driver is being interviewed, and is among those hospitalized. 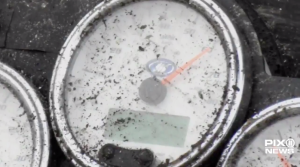 MOTT HAVEN, the Bronx --- A volunteer for mayoral candidate and Brooklyn Borough President Eric Adams was repeatedly stabbed in the Bronx on Sunday with an ice pick, Adams said.

The 42-year-old man was attacked near 149th Street and Morris Avenue, police said. His injuries were not considered to be life threatening.

The Foo Fighters were set to shake the famed arena with a Sunday concert — the venue's first show in more than 460 days.

LONG BRANCH, N.J. — A beach party that drew thousands to a New Jersey shore city prompted officials to shut the event down and resulted in four arrests, authorities said.

The public safety director’s office of Long Branch said in a Facebook post Sunday that a social media post started the gathering along the beachfront around Pier Village Saturday night and attracted “what turned out to be thousands of young people.”

At least 5 shot overnight in NYC, including 2 teens, man in wheelchair

Fireworks retailer warns of July 4 shortage: Here are the states where it’s legal to stock up

What to know about child tax credits ahead of July 15

Could your medication raise your risk for heat-related illness?

CDC reports increase in respiratory viruses, especially in kids, as masks come off in parts of US

App that turns you into a cartoon: What you need to know about Voila

Jeep plows into family in the Bronx, injuring 6 people: NYPD