NEW YORK — Angelina Liu was squealing with delight as she played with her mother, Pei Xia Chen, on Wednesday — just about ready to take her first steps at 11 months old.

She later tapped a photo of her late father, Wenjian, as her mother softly murmured “baba.”

The baby was born more than two and a half years after her 32-year-old father was assassinated, thanks to the miracle of science.

“Every time I look at her, I see my husband,” Pei Xia told us Wednesday, inviting us into the home where she moved two years ago. 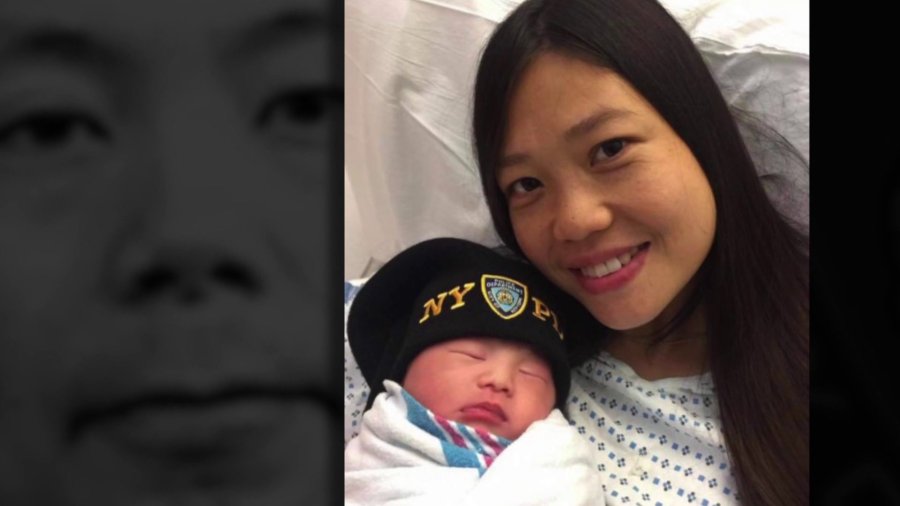 Angelina bears a strong resemblance to her father, who was fatally shot by a deranged Baltimore man, as Liu sat in a Brooklyn patrol car with his partner, Rafael Ramos, on December 20, 2014.

Ramos also died at the scene.

It was five days before Christmas, but Pei Xia Chen told us Wednesday she didn’t believe in any religious traditions at the time.

“I have no religion before,” the young widow said to PIX11. “Now, I do, because of this miracle baby. I believe in God now, and I want to have faith in my life.”

Wenjian Liu was an only child. His parents were heartbroken by his loss, and Liu’s widow had the presence of mind to make a quick request at Woodhull Hospital, where Liu and Ramos were brought after the 2014 shooting.

“He always wanted a baby, so something just came into my mind,” Pei Xia told PIX11. “Was it possible to take out his sperm?”

Doctors at the hospital were able to honor her request.

Her eggs were extracted and fertilized in a lab dish.

The embryo then had to be implanted in her uterus.

But she continued the shots. And the procedure worked.

“Thank God, it worked for me the first time,” Pei Xia Chen said with a joyful smile. “I believe my husband watched out for me. I was so thankful it worked the first time.”

Chen repeated a story she’d told before, about a dream she had the night Wenjian died. She saw him in uniform and heard a baby crying.

“He had a baby girl,” Chen recalled of her husband in the dream. “I took the baby girl. I knew I would have a girl.”

Chen didn’t tell Liu’s parents she was pregnant with their grandchild until about a month before the child’s birth.

Wenjian’s parents were present at the hospital when Angelina was born last July, and Pei Xia said the little girl has brought happiness back into all their lives.

“She’s such a good, great baby,” Pei Xia said of Angelina. “I smile all the time now.”

“We see her as emotional support to my in-laws,” Chen said. “They always love her so much. They always say she looks exactly like their son.”

Wenjian Liu, like his wife, emigrated to the United States from China when he was young.

The couple dated for seven years before they married and had a second wedding ceremony in China in 2014.

Pei Xia used to work in the medical insurance business, and her husband would drive her to work and pick her up.

“He was very caring and always put me first, himself second,” Pei Xia recalled.

The powerful memory of Pei Xia Chen eulogizing her husband at his funeral is a vivid one.

“He is my soulmate,” Pei Xia Chen said through tears. “Wenjian is the best husband and son.”

Liu was posthumously promoted, with Ramos, to first grade detective, his family receiving a gold shield.

After Wenjian’s death, Pei Xia said she overcame her fear of dogs and got one that she promptly named Liu.

And the widow calls Liu’s former colleagues from the 84th Precinct in Brooklyn “my big, blue family.”

There was a christening party at the precinct Father’s Day weekend, after Pei Xia decided to have Angelina Liu baptized a Catholic at St. Patrick’s Cathedral.

Police Commissioner James O’Neill was among those who attended.

“I believe she’s a gift from God,” Pei Xia Chen said of Angelina, “and that’s the reason I wanted to baptize her. She’s like an angel to me, and she changed my life. “