(PIX11) — ESPN has suspended reporter Britt McHenry after video surfaced showing her belittling a parking lot attendant after her car had been towed.

In the video, McHenry is throwing a tempter tantrum and insults the female attendant who is off camera. “I’m in the news, sweetheart. I will f–king sue this place,” she says. Even after the woman warns McHenry she’s being recorded, she continues her vile tirade. “Yep, that’s all you care about. Taking people’s money,” she says. “With no education, no skill set, just wanted to clarify that.” 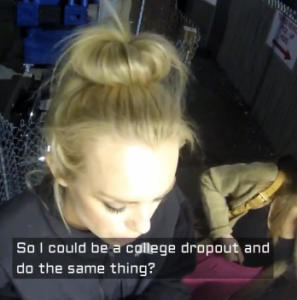 McHenry doesn’t stop there. She begins taking shots at the woman’s appearance, as well. “Maybe if I was missing some teeth, they would hire me huh?” she asks rhetorically. After the employee responds, McHenry continues — with her friend laughing in the background. “Cause I’m on television and you’re in a f****** trailer honey.”

The network suspended McHenry for a week, effective immediately. Thursday, she tweeted an apology.

“In an intense and stressful moment, I allowed my emotions to get the best of me and said some insulting and regrettable things. As frustrated as I was, I should always choose to be respectful and take the high road. I am so sorry for my actions and will learn from this mistake.”