(CNN) — A south Georgia man was charged Tuesday with murder in the death of a couple who went missing last week after contacting a car seller on Craigslist, police said.

Ronnie “Jay” Adrian Towns, 28, also was charged with armed robbery, the Telfair County Sheriff’s Office said on its website. He will be arraigned later Tuesday.

The victims were shot in the head, police said.

Elrey “Bud” Runion, 69, and his wife, June, 66, had driven three and a half hours from an Atlanta suburb in search of a classic car after posting on the popular want-ad website. Their bodies were recovered Monday in woods in rural Telfair County.

An autopsy Tuesday confirmed their identities.

The couple made the trip to look at a 1966 Mustang, and once Runion got to Telfair County, the suspect communicated with him, according to the sheriff. He did not say who called whom. McRae is about 180 miles from Marietta.

“Early on in the investigation, we did contact Mr. Towns, and we did interview him and by the information he provided, we found it to be false and deceptive,” the sheriff said shortly before Towns turned himself in. “After we interviewed him, our efforts to contact him were unsuccessful. Today we’ve contacted his family, and they’ve been helpful in locating him.” 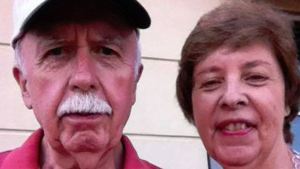 For days, authorities searched for the couple using helicopters and watercraft, Steverson said.

Deputies contacted land owners and hunters familiar with the area in case they had seen anything suspicious.

The FBI and Georgia Bureau of Investigation assisted with the search.

“I am eternally grateful for the prayers that have been lifted up, the encouraging words, complete strangers who have reached out, we are so thankful for that,” said Josh Patterson, the couple’s son-in-law.

“Bud is a veteran. He and June are great people. They give so much; they are selfless.”

The Runions were last seen driving a champagne 2003 GMC Envoy, which was recovered from a pond near their bodies.

Though the overwhelming majority of Craigslist transactions occur without incident, the site has a history of being co-opted by criminals.

Just in recent years, there have been numerous such instances. In Henderson, Nevada, police said a man placing an ad in July met three men at a park, who took him to a vacant house, tied him up, beat and robbed him, then escaped in his car.

In March, a San Jose, California, woman responding to an ad for a cellular phone was allegedly kidnapped at gunpoint by two men who drove her to an ATM and demanded her passcode, police told a newspaper.

In May 2013, a Maine teenager drove to Portland to sell his BMW sedan to a 29-year-old who had responded to his Craigslist ad. The teen was allegedly forced into his own trunk and driven to Delaware, according to media reports and an FBI affidavit.