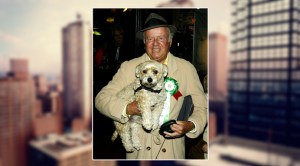 NEW YORK— Actor Dick Van Patten, who played the good-natured father in the TV show “Eight Is Enough,” died on Tuesday. He was 86.

Van Patten died at Saint John’s Hospital in Santa Monica, Calif., from diabetes complications, his representative, Jeff Ballard, told Entertainment Weekly.  “He was the kindest man you could ever meet in life. A loving family man. They don’t make them like him anymore,” Ballard told the website.

Van Patten was born in Kew Gardens, Queens, grew up in Brooklyn and got his start as a child actor and model.

He  appeared in nearly 30 Broadway shows, as well as in scores of  movies and TV shows.

His movie roles included “Freaky Friday,” “Robin Hood: Men in Tights,” and “Space Balls.”  The actor was best known for his role in “Eight Is Enough,” the ABC family comedy-drama which aired from 1977 to 1981.  He played family patriarch Tom Bradford, a newspaper columnist in Sacramento, Calif. who was the widowed dad of eight kids  — trumping “The Brady Bunch” by two offspring.

The show was based on the real-life story of newspaper writer Thomas Braden, who wrote a book that was also called “Eight Is Enough.”

Van Patten also wrote several bestselling books including “How To Get Your Child Into Show Business” and his autobiography “Eight Isn’t Enough.”

Patten is survived by three sons, Nels, Jimmy and Vincent, and wife Patricia Van Patten, to whom he was married for more than six decades. The family often appeared with Van Patten in commercials for Oldsmobile.