QUEENS — A Colombian-born Dreamer raised in Queens and in the middle of a campaign for the New York State Assembly knows what life is like for most of her potential constituents because she’s lived it.

Catalina Cruz, 35, came to the U.S. with her mother to escape a war-torn country. She grew up undocumented as the working poor and then worked more than 40 hours a week to support herself in college and law school, still graduating with thousands in student loans. Cruz knows what it’s like to struggle with affordable housing, as many in Elmhurst, Jackson Heights and Corona do.

Cruz fought for tenant, immigrant and workers’ rights in her years as a lawyer and civil servant in both the Cuomo administration and the office of City Councilmember Julissa Ferreras-Copeland. When President Donald Trump was elected, she felt the causes she’d championed were in jeopardy, so she kicked off a campaign for office in District 39, where almost half the population is foreign-born.

“I felt like this was the only thing that made sense,” Cruz said.

The Democratic candidate will face off against Assemblywoman Ari Espinal and Yonel Letellier Sosa in the September primary. Espinal took the seat, previously held by Francisco Moya, in an April special election held after Moya moved from state government to the New York City Council.

Cruz would be the third Dreamer to serve in an elected office in the country if she wins the general election on Nov. 6.

The years she spent living undocumented, from when she flew in to Kennedy Airport as a 9-year-old girl on a cold day to when she became a permanent resident in 2005 and a U.S. citizen in 2009, made her “understand what it means not to have a political voice.” 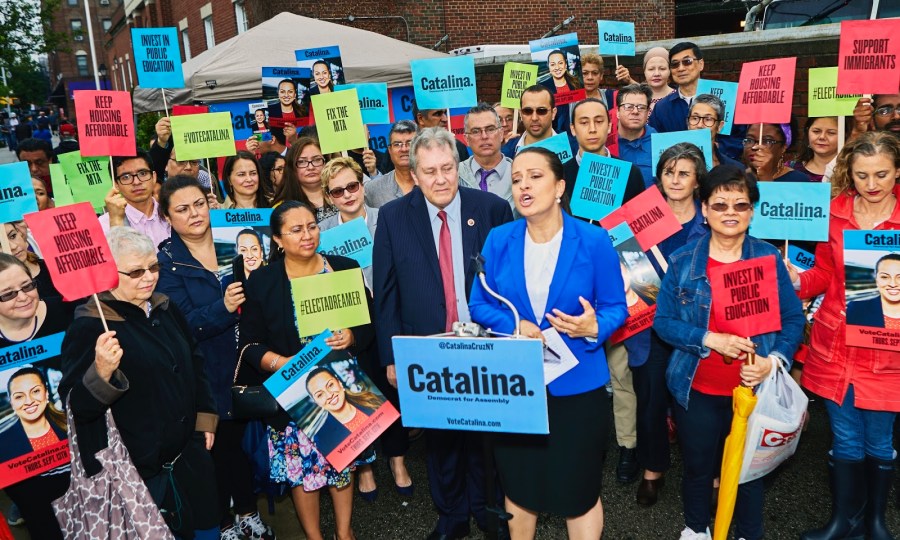 Like Alexandria Ocasio-Cortez, the candidate who defeated incumbent Congressman Joseph Crowley in a June primary, Cruz’s campaign isn’t taking corporate donations. Cruz said she wants to be a  mouthpiece only for everyday Queens residents.

“I want to be beholden only to the voice of the people,” Cruz said. “They need someone that’s committed to them and them only and that’s what I can offer.”

“My opponent moved into our community just a few months ago — I doubt she could find a hair salon, much less truly understand the issues we face,” Espinal said. “But I welcome everyone to our community, and I am 100 percent confident voters will make the clear choice on Sept. 13.”

Cruz said she feels strongly connected to the neighborhood. She also has the backing of several big Queens names. Both former Councilwoman Julissa Ferreras-Copeland and Councilman Daniel Dromm believe Cruz has what it takes to handle the issues that matter in the community.

To Cruz, that means a focus on affordable housing, an issue she considers important in all three neighborhoods she’d represent, immigrant rights, small businesses, the MTA and street cleanliness.

“If there is something that the majority doesn’t want but it’s going to benefit our community, I’m going to push for it,” she said.

While immigrant issues are close to her heart, Cruz said she is prepared to listen to her potential constituents and fight for whatever they need.

“Just because we are going to push one item, doesn’t mean we can’t push three other things at the same time with the same force,” she said. “Because of the kind of community, we can’t afford to say ‘this can wait.’ We have to do it all at the same time.”

GREENPOINT, Brooklyn --- There’s a young woman in Greenpoint who has a gift for all Asian American New Yorkers to help them feel safer during this wave of anti-Asian hate crimes.

Residents 50 and over can go to one of 31 sites across the five boroughs and get a vaccination, without scheduling in advance. Previously, walk-in appointments were only for New Yorkers 75 and older.

The fire marshals announced Friday that they determined the April 6 blaze in the six-story building was an accident, and smoke alarms activated as they should have.