Some people all over the world have been excited in recent days about reports by news agencies worldwide — including one from CNN — declaring that Pope Francis apparently believes they can.

It turns out it’s unclear what he believes about this.

A previous pope, Paul VI, had no doubts. “One day we will again see our animals in the eternity of Christ,” Paul once told a boy grieving the loss of his pet.

That quote, from the pontiff who reigned from 1963 until his death in 1978, was inaccurately attributed to Francis.

The confusion may have begun when Italian daily newspaper Corriere della Sera referred to Paul’s quote in a story that carried the headline, “The pope and animals: ‘Heaven is open to all creatures.’”

The story itself does not indicate Francis said that. Instead, it refers back to Paul VI. 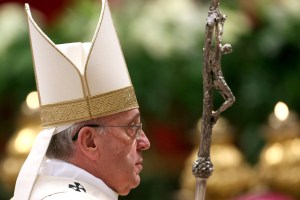 The writer for the newspaper pointed to something Francis actually did say: “Sacred Scripture teaches us that the fulfillment of this marvelous plan cannot but involve everything that surrounds us and came from the heart and mind of God.”

That remark, the writer suggested, “widened the hope of salvation” to animals and all of creation.

The headline on the article quoted Francis as saying, “Heaven is open to all creatures.” But there’s no sign Francis said that.

A search through the current Pope’s writings and remarks showed no immediate sign that he has taken a clear position on the question.

While Catholic teachings don’t reject the notion that animals have souls, traditional dogma has long held that animals don’t go to heaven.

It’s an emotional question for many people.

Amy Kitchens Pollick of Decatur, Alabama, shared an anecdote from her childhood on Friday. When she was 10 years old, death claimed her beloved cat, Big Tom.

Her father had tears in his eyes when he told her, “Now Little One. The Bible says the Lord sees even every sparrow that falls,” Pollick wrote on Facebook. “If He sees every sparrow, He’s not going to forget about a good old kitty like Big Tom.’”

“I’ve held that in my heart ever since,” she wrote.