NEW YORK – A strong onshore flow and an approaching cold front will bring the return of showers across the region for the next few days. On top of this, a tropical system which could become Joaquin by Monday night, and will drift northwest before getting caught with the cold front on Thursday.

The moist flow off the ocean could bring some drizzle and fog Monday night. Temperatures will be in the mid to upper 60s.

Just to be clear, #TD11/TS #Joaquin will have a wider geographic impact than this implies. Think nor’easter, not TS. https://t.co/OHEIREgrov

On Tuesday, the morning fog will eventually burn off by midday. The cold front will start to make its way east reaching the Appalachians by the afternoon. That could bring a few scattered showers late in the day. Ahead of the front, expect it to be warm and humid with highs at around the 80-degree mark. 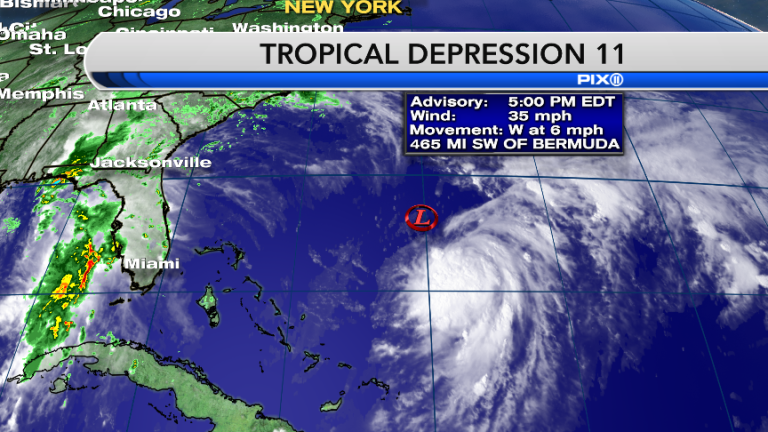 Tropical Depression 11 is building as it heads north, and it could mean heavy rainfall for the tri-state area.

Eventually the front approaches and rain will become steady Tuesday night into Wednesday. The front will be enhanced by deep tropical moisture so the rain will be heavy at times dumping anywhere from 1-3”. Rainfall rates are also expected to be high at times, so flash flooding will be a concern across the region.

@EricHolthaus Basically, if you live anywhere from NC to Maine, consider buying an ark. Up to a foot of rain possible by next Monday.

Further down the road, we are watching a tropical system in the Atlantic Ocean. Tropical Depression 11 formed late on Sunday and is expected to become Tropical Storm Joaquin by Monday night. Current forecasts show the storm drifting northwest maintaining status as a tropical storm through Thursday.

The cold front that will pass through our region on Wednesday will “catch” the storm and drive it quickly up north on Friday as an “extratropical” low.  That is just a fancy name stating that the storm loses its tropical characteristics. Regardless of this fact, this storm could bring another round of drenching rains from late Friday into part of the weekend.

There is a lot of uncertainty this far out on what this storm will do to our area. We do not know the extent of the rain across the region. On top of that, coastal and river flooding will be questionable.  The exact details will have to be worked out for the next few days. We’ll keep you up to date as we get closer.