NEW YORK (PIX11) — Hundreds of demonstrators are marching across the Brooklyn Bridge Sunday afternoon to demand fair treatment for Peter Liang, the police officer who fired a fatal shot in a darkened stairwell of a city public housing complex building that ricocheted and struck Akai Gurley.

The rally began at Cadman Plaza Park in Brooklyn. Protesters then marched over the Brooklyn Bridge heading to Chinatown.

Liang, whose gun was draw, and his partner were part of a “violence reduction overtime detail” in Brooklyn’s Pink Houses on Nov. 21.

They were patrolling a dimly lit staircase when Gurley and his girlfriend opened a door to the stairway a flow below the officers. It was then, investigators said, that Liang fired a single shot from his service weapon.

The bullet pierced Gurley, who died from his injuries.

Police Commissioner William Bratton initially said the deadly encounter was the result of an “accidental discharge,” but emphasized that the investigation was ongoing.

In February, Liang was indicted in Gurley’s death.

The fatal shooting came days before a Staten Island grand jury declined to indict an NYPD officer in the chokehold death of Eric Garner, a decision that sparked days of protest in the city resulting in hundreds of arrests. 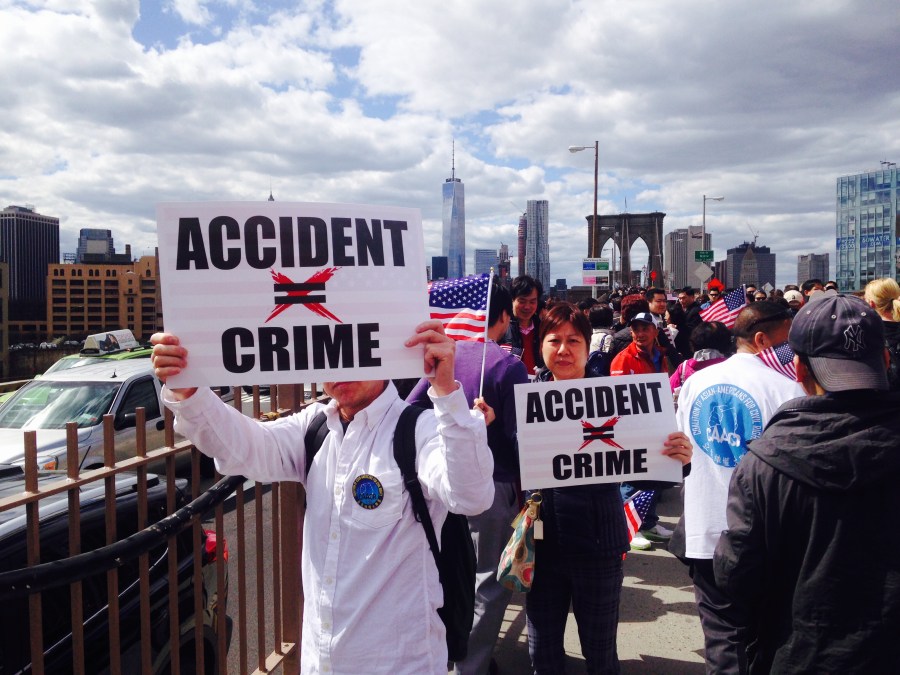