MILWAUKEE (PIX11/WITI) – The list of rap legends who died before their time is a long one — but it doesn’t include Milwaukee-based “Jakitdown” who claimed have died in a car accident to avoid child support payments, prosecutors say.

Jakitdown, whose name is actually John McCroy, has been called out by real stars Tyrese and P. Diddy for abandoning his children while boasting about cars and money, according to FOX6.

While some might be embarrassed by the critical memes, comments and tweets, McCroy is trying to leverage whatever attention he’s getting into hip-hop stardom, according to the station.

“Stacks and stacks of money, all this jewelry, the cars. I was just like ‘Wow, really?’”

McCroy, who faces five felony charges of failure to pay child support, was apparently involved in a car crash in 2009 — an accident that he still claims killed him.

He recently told FOX6 he hasn’t made any payments because “I was ineligible to pay it.  I was in a hospital and died in a car accident.”  Because he is very much alive, McCroy is now working on a new scheme to dodge child support — he has hired a lawyer and now claims he was disabled in the car crash. 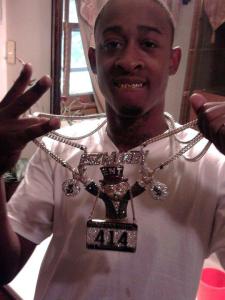 A year after his car accident, however, McCroy tried to buy a car but found out that he had to be making child support payments to receive a loan.  It was then that he made a single payment of $100 in order to get the loan, according to prosecutors.

McCroy is now using his own “death” to further his rap career, recently releasing a mixtape called “Dead or Alive.”  Song lyrics include, “I like the way you dis me on Facebook and my Instagram.  I died!”

Since this summer he’s also been all over social media boasting stacks of cash, a new car, diamond shades, a fur coat and more, but that wealth is apparently not leaving his pockets.

“I feel like if he could be out here being flashy that he can take care of our child,” the mother of his daughter, Canience Haynes, told reporters.  “Stacks and stacks of money, all this jewelry, the cars.  I was just like ‘Wow, really?’”

McCroy has three children — each with a different woman.

He’ll go to trial in February and stakes for the wannabe rap mogul are high — if the judge doesn’t buy his latest argument he faces a maximum of seven-and-a-half years in prison.