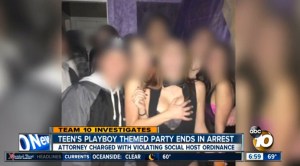 POWAY, Calif. (PIX11) – A California father was arrested after sheriff’s deputies shut down a wild Playboy Mansion-themed birthday he threw for his teenage daughter, according to officials.

“A small army of sheriff’s deputies” showed up to the Poway home to find at least two underage party-goers unconscious and multiple intoxicated teenagers, according to 10News. 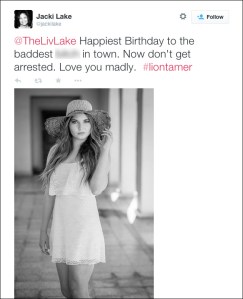 At the bash, which was billed on social media as “Liv’s Playboy Mansion,” multiple teens donned risque Playmate lingerie while others dressed as the nude magazine magnate Hugh Hefner.  Many of the photos from the party have since been taken down or made private.

The party was organized to celebrate Olivia Lake’s 18th birthday, before which her mother, Jacki Lake, tweeted “Happiest Birthday to the baddest b**** in town.  Now don’t get arrested.  Love you madly.  #liontamer.”

Lake, a former Poway High School PTA president, was not arrested — but her husband was.

According to sheriff’s deputies, they found her father, attorney Jeff Lake, inside the home and charged him with violating the town’s social ordinance prohibiting adults from providing alcohol to minors.

He faces a potential 6-month jail sentence in the case.