FERGUSON, Missouri (CNN) — While Michael Brown appeared to tussle with an officer before he was shot dead, he didn’t enter the police cruiser as authorities claim he did, two witnesses told CNN.

The women’s accounts corroborate that of a previous witness, all three of whom said the officer fatally shot the unarmed teen. 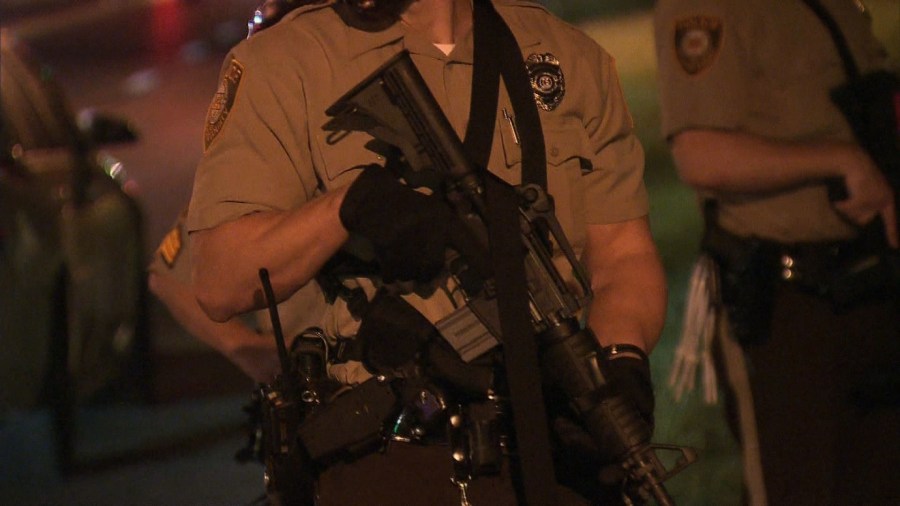 Police have said the black 18-year-old died in a dangerous struggle after trying to grab the officer’s weapon. Not so, say the witnesses.

“It looked as if Michael was pushing off and the cop was trying to pull him in,” Tiffany Mitchell told CNN on Wednesday night.

Mitchell said she drove to Ferguson on Saturday to pick up an employee for work just in time to see Brown tussling at the window of a police vehicle.

Crenshaw, still in her building, watched the same events from her window. She later shot cell phone video of the aftermath, which CNN obtained from affiliate KMOV.

It looked like the two of them were arm wrestling, she said.

Neither woman, who gave their statements to St. Louis County police, say they saw Brown enter the vehicle.

Instead, a shot went off, then the teen broke free, and the officer got out of the vehicle in pursuit, the women said.

“I saw the police chase him … down the street and shoot him down,” Crenshaw said. Brown ran about 20 feet.

“Michael jerks his body, as if he’s been hit,” Mitchell said.

Then he faced the officer and put his hands in the air, but the officer kept firing, both women said. He sank to the pavement.

After that, Crenshaw hit record on her cell phone. News of the killing spread fast through the neighborhood, and Brown’s uncle walked up to the body to see if it was really his nephew, Crenshaw said.

The video shows police directing him back behind police tape.

Brown’s shooting death, and police alleged stonewalling of details, have lit a fire in Ferguson. Residents say the officer’s alleged actions were a brazen act of aggression, especially when Brown, who was about to start technical college, was unarmed and not threatening.

The city has seen protests every night since the Saturday shooting.

Wednesday was no different.

As night approached, police assembled in tactical gear near the protesters. Earlier in the day, police had issued a statement asking them to disperse before dusk.

At one point, the St. Louis Post-Dispatch reported, police had placed what it described as “high-caliber automatic weapons” on tripods atop armored vehicles and pointed them at protesters.

Police fired tear gas canisters at a crowd near a gas station that has turned into a gathering point for rowdy protests after dark.

Officers raised their guns at people heading for the protest, yelling for them to turn back.

As protesters scattered from the thick clouds of tear gas, officers in riot gear marched slowly in their direction to clear the area, ordering protesters and reporters filming to shut off their cameras, according to media reports.

A tear gas canister landed directly in front of the live television reporting position of Al Jazeera America; the crew ran, leaving its equipment behind. Then an officer later approached the camera and pointed it at the ground, CNN affiliate KSDK reported.

Earlier in the day, police detained and released two journalists — Wesley Lowery of The Washington Post and Ryan Reilly of The Huffington Post — who had been covering the shooting and the unrest. Neither was charged.

They said they were taken into custody at a McDonald’s restaurant, where they were working, for failing to meet a police officer’s deadline to pack up their gear and move.

“All of this went down, as you can see in the video, in less than two minutes,” Lowery told CNN’s “New Day.”

“The idea that we posed any sort of threat because we weren’t quickly enough packing up our bags is just ludicrous,” Reilly told “New Day.”

Ferguson police Chief Thomas Jackson said he did not know the detaining officers, adding: “We had a lot of different agencies out there.” He said he had spoken to both of them.

Lowery said the arrest impeded his ability to perform his work.

“My job down here it to be a reporter. I wish the police would have done their job and allowed us to do ours,” he said.

In all, police arrested 18 people — including the two reporters — Wednesday night, Jackson said, bringing the total since the weekend to 65. Two police officers were injured Wednesday night, he said.

After the night’s clashes, Missouri Gov. Jay Nixon announced he would cancel previous plans and visit Ferguson on Thursday for the second time since the shooting.

“The worsening situation in Ferguson is deeply troubling and does not represent who we are as Missourians or as Americans,” Nixon said in a statement. “While we all respect the solemn responsibility of our law enforcement officers to protect the public, we must also safeguard the rights of Missourians to peaceably assemble and the rights of the press to report on matters of public concern.”

On Wednesday, Jackson told CNN that the officer who shot Brown had been hit and suffered swelling on the side of his face. He was taken to a hospital and released the same day, Jackson said.

Five days have passed since Brown’s killing, and the public still does not know the name of the person who pulled the trigger.

There have been cries of a cover-up, but authorities said police have received death threats against the officer and his family. And they want to prevent further violence.

Hackers have gone after the personal information of government and police officials, authorities said.

Federal civil rights investigators and the FBI are carrying out their own inquiries into the controversial case. In the town of 21,000, there’s a history of distrust between the predominantly black community and the largely white police force.

“Race relations is a top priority right now and, as I said, I’m working with the Department of Justice to improve that,” Jackson told reporters Wednesday.

Dorian Johnson, who said he saw the shooting, told CNN on Tuesday that the officer who opened fire is white.