Correction: This article has been corrected to clarify that the listing price on Princess Diana bears has little connection with actual value. It also has been edited to reflect a warning issued by the website tycollector.com.

(PIX11) — Oh, the 90s. If there’s anything the decade taught us, it was how to spend copious amounts of money on mundane objects that may be worth a truckload one day.

For the thousands who blew their hard-earned cash on Beanie Babies, the small teddy bear-like animals stuffed with “beans” and labeled with a heart-shaped “TY,” the only thing their investment ever got them was a healthy dose of shame and regret.

One couple in Great Britain reportedly hopes their flea market find may turn into a down payment for a house, but a leading collector group is dismissing the possibility, and has in fact issued a fraud alert. 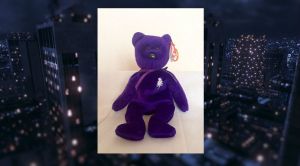 A collector warning has been issued after a couple in Great Britain bought a Beanie Baby they believe is worth thousands of dollars. (Photo: Daily Mail)

Leah Rogers and Ryan Flanagan were selling a range of toys in Bude, Cornwall when they noticed a particular purple bear at a nearby seller’s stall, the Daily Mail reported.

Flanagan, 22, used to collect the bears and recognized that it was the limited edition Princess Diana Beanie Baby.

The bears were first released in 1997 to raise money for the Princess of Wales Memorial Trust after the former future queen died in a tragic paparazzi-fueled car accident in Paris.

Certain markers indicate that a Princess Di bear is not a first edition, like an extra space in the poem or a stamp inside the tag. 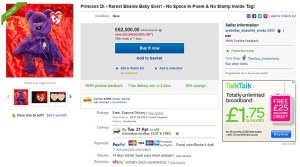 They now have their own listing on eBay with a starting bid of £20,000 ($29,890). The couple is hoping to turn their special find into a down payment for a house, the Mail reports.  But there have been no bids yet, and their good fortune may be much ado about nothing.

Listing price and value are hardly connected, especially on auction sites such as eBay. While they have the limited edition bear,  Tycollector.com has issued a fraud alert warning consumers that their Diana bear isn’t worth much at all, regardless of production run.

The company that produced Beanie Babies made more than $6 billion from the craze, which ended around 1999.

Although collectors believed that certain Beanie Babies would eventually increase in value, including the ones shaped like bears or “retired” designs, their investments rarely paid off.

JAMAICA, Queens — A man wanted for a series of anti-Muslim assaults in Queens has been arrested and charged, police said Tuesday.

Police arrested 30-year-old Naved Durrni Tuesday. He's been charged wanted in connection with several recent assaults in South Ozone Park, as well as one in nearby Jamaica on Monday.

JACKSON HEIGHTS, Queens --- The NYPD is looking for a suspect in what it calls the "sexually motivated" robbery of an 11-year-old girl in Queens Sunday.

The incident happened at 8:45 a.m. near 86th Street and Northern Boulevard in Jackson Heights. The girl was walking to a grocery store when an unknown man approached her from behind, grabbed her by the throat, removed the mask from her face and then dragged her into an alleyway.

JERSEY CITY --- Two men have been arrested and charged in the fatal shooting of a man in Jersey City Saturday, the Hudson County Prosecutor's Office said Tuesday.

At around 11 a.m. Saturday, Jersey City police received a call for shots fired in the area of Grant Avenue. Officers found a man, later identified as 26-year-old Raquan Bass, who had sustained gunshot wounds to the upper body. He was taken to a hospital and pronounced dead at 11:15 a.m.

Bronx NYCHA residents call for cleanup of building and grounds

De Blasio on marijuana legalization: State needs to ‘get it in gear’ on legal weed

Jon Bon Jovi, Frank Sinatra, Whitney Houston, others to get rest areas named for them on NJ highways