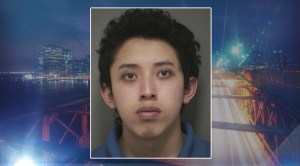 Jonathan Parra is accused of surreptitiously recording two people in the bathroom. (NCPD)

UNIONDALE, New York (PIX11) – An alleged voyeuristic Domino’s worker was arrested after a young woman noticed something odd in the employee bathroom, according to the Nassau County Police Department.

In the early hours of Tuesday morning, a 20-year-old female employee at the 935 Front Street Domino’s in Uniondale took a break to use the bathroom.

The coat rack inside the facility caught her eye, however — specifically, a cell phone peeking out of a jacket pocket.  She notified the manager, and her manager dialed 911.  The jacket, according to police, belonged to the woman’s co-worker, 19-year-old Jonathan Parra.

Along with footage of the young woman, an investigation revealed images of a 51-year-old man using the bathroom as well.

Parra faces two counts of unlawful surveillance and will be arraigned Tuesday at First District Court in Hempstead.