The activist set out on a brazen mission Wednesday, to swim the entire length of Brooklyn’s obscenely polluted Gowanus Canal.

Wearing a yellow dry suit along with earplugs, a water cap, goggles and water barrier cream for his face, Swain’s quest began shortly before 2pm.

Issues with property owners allowing him to emerge on their dock along the canal prompted a nearly 3-hour delay.

The so-called water advocate and swimmer is calling for an accelerated cleanup of the notoriously filthy canal and he hopes his swim, done on Earth Day, can highlight the cause. 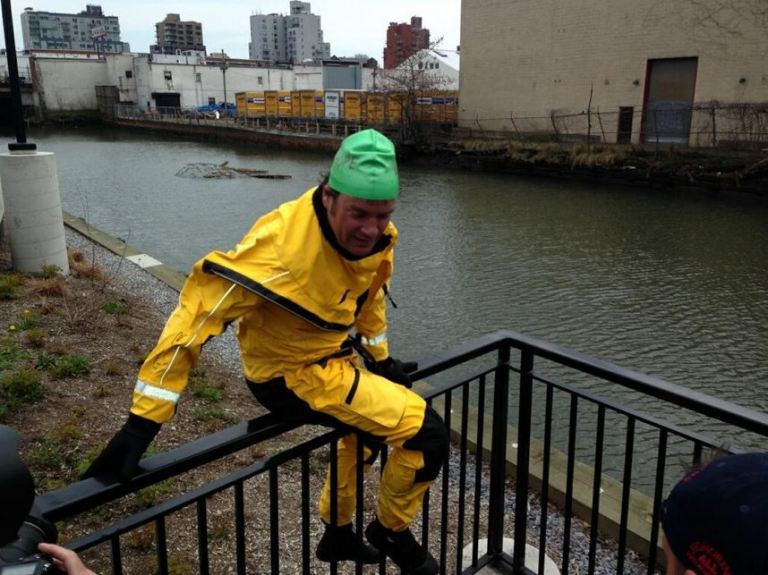 Swain’s goal is make the Gowanus Canal safe to swim in every day.

Citing contamination concerns and pending rain he ended up swimming barely two-thirds of the 1.8 mile stretch. Despite that, his his point was pretty much made.

Decades of dumping and neglect has made the Gowanus Canal infamous.

Even though it’s in the early stages of being cleaned by the EPA, the toxic sludge and waste that calls the waterway home truly live up to their reputation.

“It tasted like mud, poop, ground up grass and gasoline,” he said, answering the question on everyone’s mind.

Swain, a native New Yorker, is thought to be the first person in history to attempt to swim through the Gowanus Canal.

Swain is no stranger to pulling stunts in order to shed light on environmental issues. He swam the entire 315-mile length of the Hudson River, for clean water, back in 2004.