BROOKLYN (PIX11) – Nets won the season opener Monday night at Barclays Center after making appearances all day on the subway.

The team purchased advertising rights from the MTA for a special edition MetroCard that started appearing in the system on Monday.

Check with station agents. The MTA says “random” distribution at MetroCard machines and station booths started with Atlantic Av-Barclays Center/LIRR. The cards also will be available at the following stations (they have been known to sell out quickly):

They require purchasing at least a round-trip fare ($5) and paying the $1 fee for a replacement card.

“Not only are they buying a MetroCard, it’s a souvenir with our branding,” said Elisa Padilla,  Brooklyn Nets and Barclays Center Senior Vice President of Marketing. “We’re hoping to do many more programs like this.”

“We always encourage our guests to take the subway or LIRR to our games at Barclays Center,” said Brett Yormark, Brooklyn Nets and Barclays Center CEO. “We believe that connecting our brand with the MTA through MetroCards was a perfect way to reinforce our message of the convenience of getting to Barclays Center by mass transit.”

The MTA generates about $120 million dollars a year in revenue from advertising. The agency has expanded the areas available for ads to inlcude steps, turnstyles, and subway cars. Barclays became the first company to purchase naming rights for a station. The MTA reports that was a 20-year deal worth $4 million dollars. Other deals and sponsorships are being considered.

The price of the MetroCard deals are not disclosed. Prices for ads on both sides range from 25¢ to 45¢ per card, with minimum print runs of 250,000. The MTA produces 4 million to 5 million MetroCards every month. 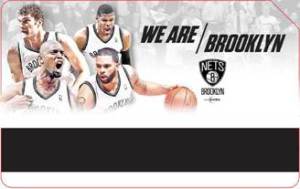 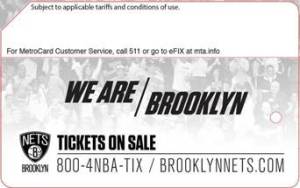